“If a painter paints, perhaps an artist arts. When they are painting, an artist is arting.” – Darrell Lynn

I had a dream last night. I was in Portland, or San Francisco, hanging out with some random leather women, some of whom I clearly knew. My waking mind does not know their faces, but I know I knew them. While discussing leather community title holding, groups I had been part of, communities that rarely gathered, the topic turned to my gender transition. A well-meaning brunette in short black boots, sheer black pantyhose, a black leather skirt, glittering low-cut black short-sleeved shirt and black leather vest, looked at me puzzled.

“I don’t get it. This whole gender-change thing. How come some people say they are born that way, while others I know get exposed to it and decide transitioning is for them? It can’t be both.”

I leaned back, in tight black jeans, tank boots, a white tee shirt with some logo or another I don’t recognize, leather bar vest, and the boy’s cap I used to have years ago. Staring at the concrete, I pondered for a while. Looking up I caught sight of someone in a pair of overalls, splattered with paint. As the bearded man walked by (vaguely resembling Nayland), I took in a deep breath and looked up. 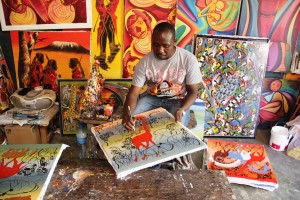 “Some people were born to paint. Ever since they were little, they picked up brushes and added color to anything they could. Hands in the mud became works of vision, splattered across the outside of their house or on their own clothes. Patterns come from their fingers, abstract and realist alike. They manifest beauty, capture what they see and what they feel.”

The woman looked sideways at me, but then shook her head in assent, half smirking, half puzzled.

“Other people experiment with painting. Maybe they take a class, thinking its’ for them, but get bored. Maybe they buy all the supplies, go to all the galleries, even try on twenty styles, but them set it aside. Some paint feverishly for years at a time, but then sit it down for windows as well.”

A few other folks gathered around, a butch dyke in an overly-loved leather jacket wrapping her arms around the woman who had asked the question.

“I even know folks who have told me they always wanted to paint, but were told when they were kids that painting was a waste of time. Or that they did it and someone they love criticized they way they painted so they gave it up.” 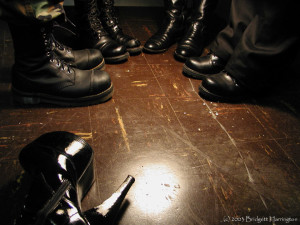 A butch transwoman in her tight leather pants wanders over, a trans-pride pin on her denim vest, a pair of handcuffs hanging from her hip. Close-shorn kinky hair and small silver studs frame her face. Her broad smile welcomes me in like a summer’s day.

“Some people hate certain types of paintings, and make fun… or even villainize… anyone who enjoys the artistic approach. They judge. Hell, there are even other painters who judge styles other than their own. There are people who don’t get why anyone would like that kind of art, or be called to create it. There are folks who don’t get it, but are cool with folks making the art that calls to them.”

Down the street, I hear the sound of a bar. Maybe it’s the Lex, circa 2001. Maybe somewhere else. We’re down the street and around a corner, a parking lot nearby… clearly not the Lex. But dreams are like that, hodgepodges of personal truths and lives never lived. Peeks into the past, future, and walkways into the midst of the records of all of humanity.

I’m leaning back against a short chain-link fence, half-height. I can feel the links under my palm, my hands tender now from having been here a bit. The woman in the skirt is thoughtful. Her jacket-clad partner kisses her on the cheek before she looks up.

“But we have a lot more baggage around gender than painting. The whole world does. And so it’s a bigger deal, a heavier hanging issue. But personally, I was born to create art. And right now, I’m a passionate painter who is fairly rooted in one style, though I do pick up other modes of expression from time to time.”

I shrug. I realize I’m hungry and ask anyone else if they’d like to go and grab something. A few folks do, a few folks head back to the bar. 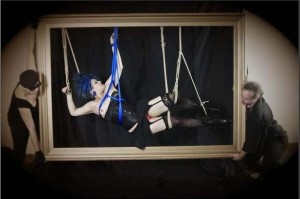 My friend Klawdya once told me that fiber was embedded in her skin. When she wasn’t typing people up, she was called to the loom. When not weaving, she had to crotchet, or spin yarn. Fiber, textiles, she can’t not do it. She’s tried.

My aunt is a compulsive artist. She paints, does pottery, does ink prints and silk-screening. My great-grandmother Kay was the same way. Painting, pottery, giant looms. I have one of her canvases in my living room. When Kay died, my aunt went mad. The loom was smashed, like her heart. I understand that level of sorrow, and sometimes our art suffers for it. We rip, we rend.

When my heart hurt, I set aside the possibility of transition. I was 16. I’d start seeing a therapist at 14 when I came home to my mother and told her I might be a boy. Having met my first transman, I wondered that it might explain how I express, how I sometimes dressed, how I had sex… that I was a bi guy who leaned towards being a femme guy.

At 16, my therapist asked me she could make sure she understood where I was at. That I was attracted to men. Absolutely, that I liked men and women, but tended to prefer men. That I liked wearing women’s clothing. Sometimes, yes, because they were fun and I looked good in them. That I wasn’t dysphoric about my lower body. Nope, I was mostly a sexual bottom, liked having options, and it worked. It was my upper body (38D) and how I was seen in the world that I had issues with.

“Why would we approve the creation of a fag.”

It’s just a dream. Unless it’s not. And perhaps right now I am painting pixels across the screen, falling in love with each stroke of the key. Let me share my canvas, let me offer up my dream. Let this arting find a place in a heart, somewhere, and together we will find a new world, a world more colorful for it.