My mother, Bonnie Kay Jauregui, was a beautiful, powerful woman who was plagued with the shadows of her past. Loving to those she cherished and fierce at holding her ground, she was proud of her work. But more than that, her contribution to her work, to her value on this planet, was something that she found unconsciously necessary to her life on this planet. A trait I share with her, though I have become highly aware of my internal story about that need to be of value as a reason to live. 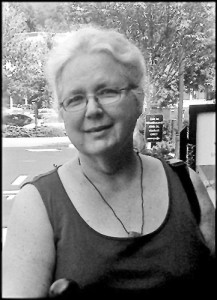 In the last few years of her life, she became part of a medical research project concerning access to health care and health care realities within her generational cohort. Every quarter she took all of her receipts and calendar from the past 3 months that had anything to do with her medical care, and met with a representative of that study to discuss her barriers to quality service, as well as the positive tools that contributed to successful care. She experienced pride in being part of this project because she expressed to me that it made her feel like part of making health care better for others down the road, in getting to make her challenges *mean* something. That it wasn’t just suffering and frustration.

I just got off the phone with the woman who was handling her case with the research project. We talked about the last few weeks of mom’s life and what the care was like. Her initial denial from her health insurance of chemo that caused complications in the following weeks that sped up her path towards death. Her challenges traversing care. Her primary medical truly being her chiropractor (who she had seen for 24 years and knew her case inside and out) rather than general providers who she had to change every few years and rarely remembered her full case.

The piece that was interesting to me was the discussion the case manager and I had around access to tools beyond the direct medical complex. Mom did not have internet access beyond the workplace until she was 60, and did not feel confident for using it for research. Though she read all of her medical paperwork that came with a prescription, her capacity to hop on websites like WebMD to research specific medications and cross-medication complications did nit exist in her reality. This is an issue around medical care that affects some early boomer generation. It is especially true though for folks of the “silent generation,” individuals 70+ who never caught the internet crazy. This is not universal in ANY way, but it is a care issue.

When we add class issues to this, insurance realities (and lack thereof), racial bias, language barriers… it adds up quickly. My mother was blessed to have healthcare through her government job and did well enough to be self-sufficient in her own apartment, but her capacity to retire on nothing but benefits at the level she was at was fairly low. The shift she would have to Medicaid would have further limited her already complex issues in care, where to get appointments with her general provider sometimes took 6 weeks, followed by referrals to specialists which took even longer. This is not a unique story in our country, at all.

As someone with my own complex medical realities, there have been windows of time when I have spent hours at a time managing my own care and speaking up for my needs. I am profoundly blessed to be self-employed to be able to do so because I can shift around the hours of work, even taking days at a time off to manage my care. This is far from the reality of the average American. When an insurance provider says “we’ll reimburse you for care,” on something that might be $10,000, it further points out the class-based concerns within the system, making treatment unacceptable to the bulk of individuals who financially live day-to-day.

I see this manifest on a sexual health level as well. Use of condoms, when a pack of 6 costs $8, may not seem like a lot. But when $8 is a day’s food budget, unconscious choices are a reality. People say “well go get free condoms from public health care and Planned Parenthood. If you live in Appalachia, or rural Arkansas, or even metropolitan areas but work three jobs and such realities take time you might not have… this becomes a class issue as well. We point and say “folks should know better” and “how is this still a thing” or “we have danced the spread of HIV for so long, don’t people get it!” And yet, we don’t see the invisible barriers to care present in teen pregnancy, STIs, and sexual shaming. 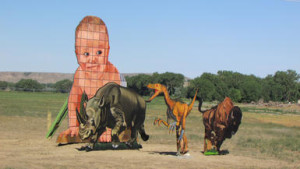 Having just gotten home from an 11 state tour across the Midwest and the south-eastern United States (in 16 days), I saw this issue very blatantly. Driving from Fargo to Billings, every 30 miles was a sign that said something akin to “don’t kill babies” or “abortion is murder.” There was, very strangely, sculpture of a giant Baby framed by a rhino, buffalo and a velociraptor. All of the forward creatures are endangered or dead, with an inference that the baby is next. It is strange. Really strange. It still creeps me out, and yet, here it was, blatantly reminding us that in this part of the US access to health care was limited by religious and social beliefs.

Downtown Billings broke through this, and I wish I had a picture of it. A man who looked like the classical Caucasian depiction of Jesus was shown, with a “know your status” message for HIV testing. Cool, Christian iconography with a message of love of self and others through testing shining through. But this was an exception in a world where this belief, and thus access to care, is so limited.

Access is a huge issue in sexuality education on a generational level as well. My mother’s generation and older. Last weekend at the Sex Down South conference in Atlanta, Mandy Farsace did a wonderful presentation on LGBT Aging that looked at some of these concerns. In a world where elders, no matter their orientation, must have unsupervised time with people in their private quarters, we infer that they are not capable of consent and a personal sexuality. Condoms and sexual health information are not provided on any level. When concerns for pregnancy are no longer present, STIs are often not considered by a population who came up in the sexual revolution or before. A time when so many STIs could be cured with a pill or an injection. Our elders are infantilized, limiting access to medical care through denial of need. This applies with people with physical and cognitive disability, so poignantly pointed out in the GLEE episode “Jagged Little Tapestry” from Season 6, where Becky Jackson (who has down syndrome) comes home with her boy-next-door boyfriend and is treated like he must be taking advantage of her. This leads to beliefs that “clearly” there are populations that do not need information, access to sexual health care, and more. Beliefs that are false.

As I sat on the phone with the person from my mother’s project, I found myself frustrated, but grateful. Grateful that individuals are digging in and putting together the numbers, the proof, that this is a problem. This is because there are so many people that find that anecdotal and qualitative studies are “not enough.” There needs to be numbers, percentages, quantitative evidence that says this is real.

But care needs are real. Access is real. Deeply and truly.

And day by day, each of us can work to help educate providers, expose issues, advocate for others to our insurance companies, expand awareness, and step up to volunteer for filling in between the blanks. Talk to your doctors. Talk to your friend. Let’s make a change, one life at a time. Let’s make changes, one policy at a time. Let’s transform this world, one issue at a time, by shifting cultural awareness and not letting so many populations fall through the cracks.