You Are My Web

She unpacks bags of dirt and tells me how deep she would like the old soil, the new soil, and the magic begins. She has pansies, and I have herbs. Curry plant, rosemary, chives, basil and cilantro all give a sad smile from having spent two days drying out. They were being acclimated to the Alaska weather. I have spent the last six months acclimating to Alaska. 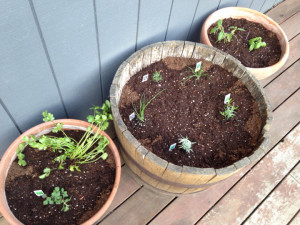 I aerate, mix, aerate, even out soil. I breathe in the sun, the soil, her smile. I breathe in, and let it all out. I have acclimated, I am home. After six months, we have decided we are staying.

It seemed very prudent and adult. And, in the end, I think it was the right choice. I had already packed all of my worldly belongings into a storage building, helping bookshelves hover in midair over storage boxes and a television screen. We did the math – between NYC storage unit rent for a year and the cost of one or two trips to visit my stuff, it was cheaper to move everything up rather than keep it all there.

The prudent part of it was the deal that it was a six month experiment. That we might be intermingling our households, but I wouldn’t get rid of much that I brought, and that we’d keep most of the boxes (that had not been too damaged in transport). That if six months passed and I could not do Alaska, or she could not live with me, or visa versa… we could ship me and my world back to the lower 48. That there was no harm in that choice either – that going back to being long distance was an option on the table. Because Butterfly and I are both pretty good at being hermits in our own right. But we have turned out to be pretty good hermits together as well.

A week ago I broke down the boxes, and we moved them to an attic that I spent the time to re-organize. I build the storage shelves I had brought with me, and her holiday decorations are now easy to find, to pull down. We got rid of the old golf clubs. I painted the porch and touched up the side of the house.

Six months in a life has flown by so fast. In two lives. In a world-wide web of friends, family, and more

I moved out of my apartment in Brooklyn in July, relocating to Queens. From there I roamed, and finally ended here. Before it shipped, Jeff Mach and his boy Alex came and claimed my TV and shelves… because they rock, and because I put a call out on social media. Social media is a blessing to me – on the road, in Alaska, in having woven a web worldwide of spiritual seekers, old lovers, friends, allies, kinksters, faeries, primal radicals, queer activists, family, leather folk, pagans, spirit workers, heart kin. It keeps me feeling closer. It keeps me locked into you as well – a collective place called home.

Home continues to be this amorphous, curious thing for me. 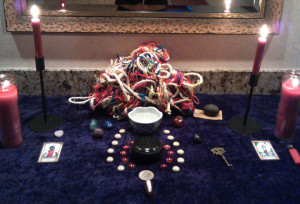 You are home. You are in your web.

At Dark Odyssey Surrender this year, we wove a web. It was inspired by/copied from the work that Lady Pandion, Skywalker and I did at Circles of Kink down in Florida. A giant circle of hemp rope strung around the room, with each person holding onto it. Before entering, each person chose a bundle of yarn on a yarn-card (that I had made and bundled in advance, with a few helpers), and told to visualize on that yarn all of what they want to bring to the event, and are hoping from the event. One at a time (then two at a time, then four), folks entered the circle. The rule? Any time you cross a line, you wrap around it, knot to it, or catch it in some way.

Over, under, around and through they danced. Spider ballet clad in leather and lingerie. A deep breath, a slow grind, laughter and sighs. We move and shake, and as each red crosses an orange, each orange a blue, the web shakes. Shakes with our breaths, grinds, laughter and sighs.

We each touch one another. Even if we do not know it, or know how.

The web hung on the wall throughout the weekend, and at the end, folks at the closing ritual danced it, and took a piece home.  The rest bundled up, twisted up, and was placed on the altar once more. One of the producers then took it home, to let its ashes fly, with the blessings having been danced. Blessings asked to dance and ripple out, as the world called for them. 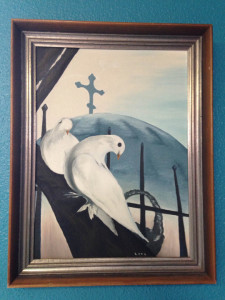 You are my grandmother, having painted when you were in Turkey. You are a silkscreen artist in Bali I have never met. You are the Olan Mills photographer who took the picture of my parents and I, when I was still in lilac lace. You are Jody Bergsma, calling forth Bear. You surround me. You are in my web.

You are the girl who I bit in elementary school when you and your friends had beat me up. You are the boy I made out to while listening to Phantom of the Opera for the first time. You are the girl who fisted me when she was drunk, while I was in a strait jacket, who did not recall having done so the next morning. You are the old woman who I met at the bus stop on the way to TNG in NYC. You have shaped me. You are in my web. 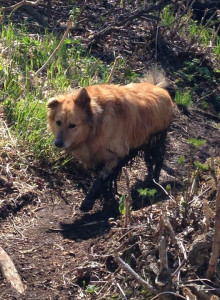 You are my silent tears at the bus stop. You are leathers draped in history. You are my songs etched with memory. You are whispers and secrets in the middle of the night. You are stories proclaimed upon the wind. You are my web.

I sweep away the cobwebs in the corner, and remove the last remnants of the vole who tried to move in before I did. We take the dogs for a hike, and wonder why, yet again, we have allowed our golden retriever to douse herself in mud. Butterfly kisses me on the cheek on the way into the kitchen. You are my web.

I am in my web. Ready to catch my dreams.

I have, after all, caught so many already. You. You, my web.