Negotiating For What You Want

On Tuesday, April 7th, I am hosting #SexTalkTuesday on Twitter from 3-4pm EST. In honor of our upcoming topic, Negotiating For What You Want… I wanted to share a secret of mine…

I have a secret. It’s one I’m rather ashamed of actually, one that has messed up relationships over the years and one that has caused people to think that I am aloof or foolish.

My secret is that I am not so good at asking for I want. That it is a skill I deeply need to work on.

I’m prone to saying I’m downright crappy at negotiating for what I want, but I know that that is self-injurious inwardly-focused language.

I was at event in February, and my Sweetie asked if she could approach two men I was interested in maybe playing with “I dunno, maybe if I wanna or they wanna or I dunno…” – she asked and I shrugged my shoulder and said something akin to “I don’t want to bother them” or “as long as I’m not going to be the one who gets turned down.” Because that’s part of my secret too. I have have been baited and teased a lot in my life with being told I was going to get something I wanted that after being let down for the 10th or 20th time… I just stopped asking lest I get turned down, and if I was told yet, I didn’t believe it until it happened. 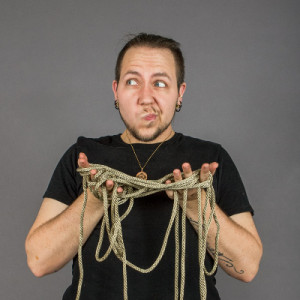 It’s frustrating, right? I don’t want to be a bitter and pessimistic person, but mixed in with the man that is profoundly optimistic and sees the world at it’s best feature is a deeply hurt being who thinks that nothing is ever real until it happens and people are prone to falling through on what they say they will do. Such is the complexity of the human spirit.

But, having talked over the past 2 years with me about this topic, my Sweetie asked if she could inquire, and I begrudgingly agreed. Inside those emotions and thoughts were rolling about of writing it off before it even had an answer and being excited and scared and happy and trying to shut it all off and feeling very loved. All at once.

“What?” he said, “if Lee wanted to play with me he would ask me himself.”

She tried to explain, but then came and found me.

“Nope, it’s my dirty secret. I’m bad at negotiating because I get in my own way. I don’t believe folks would want to play with me, and if they do agree, they bail too often, so I’ve just stopped asking.”

Cannon blinked at me, looked at her and nodded his head in a thanks. He said he was interested, and did I want to meet up after the event he was running to do some rope to talk about exactly what I was looking for and share what he was looking for, and then play if it was a match. She and I talked to make sure it was okay and I agreed, and we parted ways with a kiss and a smile.

But, inside, those emotions were rolling. The internal dialogue was a banter of:

Know what I didn’t do? I didn’t take the time to even think about what I was looking for. And know what he asked when we did get together? Exactly what I was looking for. Because that is what he had said. He was clear and honest up front in his communication. And me? I’d been so in my head voices of self-negativity and fear that I hadn’t taken the time to think about what I wanted.

I took a deep breath and looked inside. What had I been wanting? He was here, his body language said he actually was interested in me. He was smiling, leaning forward, turned on… and so I assessed. What was I looking for? And it came out in a clear stream because of all of the training and practice I have done over the years of sharing from a place of loving and open language. 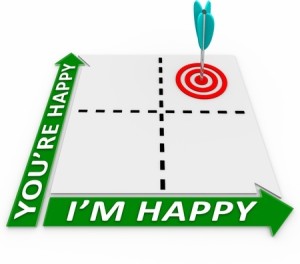 And, it worked really well. We both got what we were looking for. It was really really hot. He had other needs, and body realities, and communication styles. Different aftercare needs, body constraints. And we talked about them and came up with collaborative systems.

It was proof that I’m actually not crap at negotiation.

Know what the challenge was? My brain hamsters. My internal dialogue. I’m grateful that my Sweetie knew it and was my wingman, and helped me. But not all of us have a wingman.

But know what? All of us can look at that list and take a moment to think about what your negotiations could be.

When we use I statements, it takes the pointer finger away from them and back on you. When we use you statements, it puts blame. It gives away our power, and can hurt others too. “I don’t like having people talk about my weight during sex” is different than “You always piss me off whenever you bring up my weight during sex.” The first owns that it is your problem, and tells people that clearly.

Let folks know what yo like. What you have found fun, sexy, hot. Saying “I like spanking” is far less helpful than “I loved watching that girl go over your knee as you held her tight and slapped her slowly at first and then built up until she was moaning and crying. I found it very scary and sexy at the same time.” The second one tells the person you are negotiating with that you like physical touch, warm-up scenes, getting to a place of both arousal and tears. And? It’s a porn story too. It that’s too much talking, something as simple as “Um, spanking with some cuddling and stuff” is a pretty darn good tool too!

Don’t just share what turns you off! If our partner thinks we are only full of what pisses us off and annoys us, the hotness-meter can go down pretty quick. Give a few tips and tricks as to what does work for you. Share your hot buttons. Do you have a part of your body that you HATE soft touch on but love firm touch? Don’t just mention the hate, mention the hot too. Otherwise, your partner might avoid that area entirely. Sharing your easy buttons gets you hat much closer to a hot and connective time.

Living with complex medical realities should not mean we don’t get the play we want. Instead of saying we have disabilities that stop certain types of play, I like pointing out that we need to work with or around them, and then give ideas. One guy who I used to tie up regularly had a shoulder injury that took away most movement behind his body. I was given the opportunity to come up with LOTS of creative ways to tie his arms at his side, in front of him, above him, crossed around him, around pillars… it was fun. But that’s because I looked at it as an opportunity for us all to win while we were negotiating. And, as a person doing the tying, I get to share all of my body challenges too. That inhaler? I bring it up each time I am playing, Top or Bottom.

But remember the body joys! That guy couldn’t get his arms behind his back. But know what he did like? Bondage on his face. His face loved touch. Knowing that, I capitalized on it, lots of head cages, bandage mummification… yum.

If I know someone likes fear, and I like making people fearful using pressure points or scary dialogue, I can bring that up. That is what I call the “core of your kink.” If your core is safety, maybe something else beyond bondage might be on the table too if your partner brings it up. You like intense sensation? Your partner now has an insight as well as an opportunity to ask the followup question of “are you open to intense sensations from other tools or sources, like electro-play or caning?” You can say no, but you might say yes too. This initial bondage discussion suddenly has found you a hot caning partner!

Other constraints are things like body marks, types of play available… and anything else that comes to mind.

Aftercare is any form of tool or activity that helps an individual return to a normalized state of consciousness after a scene, ritual, form of play, sex, energetic working, or whatever we’re calling stuff today. Some people want cuddles in a furry blanket and to be brought truffles (that could be the rigger or the model, the Submissive or the Dominant). Maybe they want to go cry in a corner and rebuild themselves up like the Phoenix without being asked if they are okay. Maybe they need to process right after the scene, or process 3 weeks later over dinner. The spectrum is vast.

Everyone gets to share their needs, wants and desires. I was happy to get passed off to someone else. My play partner wanted some skin to skin cuddle time. We both got our needs met by him and I cuddling, then me being passed off to her, and her joining us as the 3 of us helped him untangle lines as he coiled up his rope.

Is it a safeword and a word to share you want more? Dropping a bandana or jingly toy?  Giving constant yesses and “oo, more to the left”s? Maybe you like to dance and writhe? Do you like to go completely silent? And if so… how will your partner know if they need to back off or dive in deeper? That last one is a tricky one for pick-up play, because silence can be interpreted in a thousand ways, and miscommunication is thus far more likely.

The trick though, no matter what you choose? USE IT. If you agreed to a safeword, use it. You can always go back in or try something new. Live to play again, don’t play until you are resentful or truly harmed, and then blame someone. There is no need for that. Remember, this stuff is about hot play, connection, sacredness, sensualness, or whatever your reason for playing is. It’s not supposed to be being used as a way to learn to hate your partner. Mind you, if your relationship is specifically about toughing it out… at some point you consented to that. And you know what? That was negotiation. But two (or more) people always have the right to connect, communicate, and share their realities on some level. Even if that level is walking away. BDSM and sexual joy is no reason to accept abuse. Ever.

But I have a secret.

But you know the amazing thing about developing a practice like yoga? You get to develop your practice by practicing. And so it is with negotiating for what you want. You get to practice your practice. And so do I.

And know what? This is just one style that worked for me for this one scene.

Join me Tuesday, April 7th, as I host #SexTalkTuesday on Twitter from 3-4pm EST. We’ll be talking more about Negotiating for what you want… and share our own secrets, desires, questions and concepts for this fascinating topic that we all get to work on. Practice. One day at a time.