Today I wandered into Kaladi Brothers Coffee near Title Wave bookstore. Kaladi is our local chain of coffee shops, featuring better coffee than other large chains, and fantastic gluten-free muffins. Though I eat gluten, I really enjoy supporting artists who make these foods, especially when they are delicious. I have a friend with Celiac, and I want to make sure they keep getting their needs met. 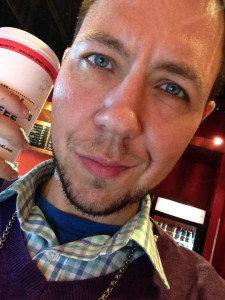 Holding my latte and muffin in hand, on my way back to the laptop where I am working on a book review and writing my own book, I saw a masculine of center female at birth individual. I gave a faint smile and a nod, and the reply was a faint smile and nod in return. But it was from queer to queer, not masculine DFAB (determined female at birth). Not that I have been butch spectrum since I was a teen, but the nod of transition and gender fabulousness isn’t really there.

Sitting over lunch a few months back, my friend Spencer Bergstedt shared his loss as well. The loss of the butch nod. Wandering through any town, when you saw another butch dyke you would nod your head and know that you *get* it. You know the journey, the struggle, a slice of their story. That you are not alone.

But we become alone. That table was wonderful because Spencer had transitioned 20 years ago. I had transitioned 9 years ago. And the third transguy had just begun his journey. It was wisdom and heart, shared over a bench, brought together by kink, leather, heart… and a nod of sorts.

After a while, the nod fades. We become just another guy. And men are so often invisible. We blend into a sea of other dudes. Wasn’t and isn’t this what I want though? I literally declared that I wanted to be an anonymous guy at a coffee shop… and now I have it. Except of course for the mint plaid shirt and purple sweater.

I am convinced that a huge sweep of depression (occasionally in a clinical sense for some guys) and loneliness passes through transmen because of men’s bathrooms. In women’s restrooms, people see you. Waiting in line you catch eyes, roll them with other folks waiting, and if you run out of toilet paper you can ask the next stall over. People compliment on shirts and necklaces, offer you a tissue if you are crying… acknowledge that a bathroom is an okay place to cry.

These do not happen in men’s rooms. Waiting in lines you keep your head down. You roll your eyes to yourself, only to comment once in a blue moon if some dude is literally changing in the stall. You try to keep your eyes to yourself at the stalls, even if somebody whips out something unexpected. You shake off or hope you don’t have dingle berries if you run out of paper, because folks likely won’t pass you paper. And you certainly don’t compliment – unless you are in a gay bar. Unless feel free to ignore most of the above, but know that locking eyes might be taken for cruising. In a straight space it might be seen as cruising, an excuse to fight… you never know. Unless they are friends, in which case hugs only happen after hands have been washed, not when in line. Or better yet outside. 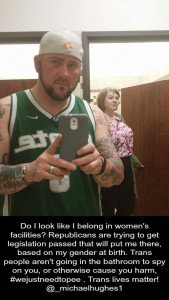 When early in transition, before top surgery, I was convinced people were listening to me pee. That somehow when going in, I “sounded” wrong at the stall, and worse yet, I used the stalls at all to pee. Mentioning this to some guy friends, I was told that no one cared. Really. And more than that, some of the guys there used the stall to pee.

One was a big dude. His body wasn’t a practical layout for using urinals. The second guy had a Prince Albert piercing, and sometimes sprayed out the sides of the ring. The third was shy, incredibly shy. He even had challenges peeing in public stalls at all.

But I didn’t know that because men’s bathroom culture wasn’t what I grew up with. Becoming invisible was strange, and sad. However, I did note that for me, testosterone lowered my sense of smell… I’m convinced it is the only way men tolerate men’s rooms.

But becoming invisible is what I wanted, right? This is part of the men’s experience.

Men’s clothing is the same way for the most part. When I went with my mother to the mall in 2007 or so, I finally *got* why different brands of jeans and white shoes were all a thing. Women have thousands of fashion options, statements that can be made. But men? Shorts, jeans, trousers or suit Sir? Though there are different cuts of each of the above, at the end of the day it is some sort of combination of that and a tee shirt, tank top, button-down, polo or hoodie/sweatshirt. There are variations, but really, its details at that point, and each season there are pretty much a few standardized looks, and crossing culturally laid out lines is looked at curiously.

And dandies or kilt-clad creatures? We read as anomalies, or see “culturally” above. Hipster is a sub-culture just as much as goth or grunge is. And culturally, if a man wears a dishdasha in the United States, it is read often as a man who we need to keep an eye on in a land where Arabic expression is met with kneejerk (internal and external, conscious and unconscious) responses.

For good or ill, women are seen. Objectified and oppressed by the standards they are held up, consumed and critiqued, absolutely. But seen. 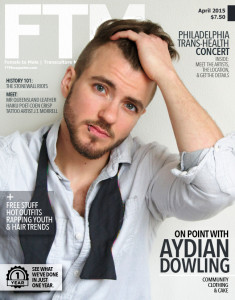 I wasn’t ready for that invisibility when I transitioned. Mind you, we could go into the experience of my personal story of transition, where I hadn’t initially planned to become a man but someone in-between, but ended up here… but no matter how I got here, I’m here. And I wasn’t ready.

Hunter Bruin, a kink educator and leatherman in Melbourne, has a tattoo on his forearm that reads “TransBear.” It allows his visibly in trans experience to show, even if he “passes” as male. Living in queer culture, it allows him to be the man he is, but also the transbear that he is, the complex queer creature that he is, in a queer relationship with a woman. That for the two of them, they are queer, through and through.

This becomes a journey for their partners. Straight men whose wife transitions. Do they thus become gay by their partner’s change? Do they become demisexual, straight except for this one exception? Do they stay straight, and to hell with outside definitions? And if meeting someone who is trans, how do you see them. Are they a guy and you like guys, and genitals have nothing to do with it? Or do you like transmen specifically, as its own orientation other than gay, straight, lesbian, queer? And one could then ask whether it invalidates trans men as men if you are a straight guy who digs their vagina? Though, on a personal note, I once dated a queer het guy who digs transmen as men and women alike… because that is his identity, and his orientation, and it’s not anyone’s business but his and his partners whether you get confused by it or not. 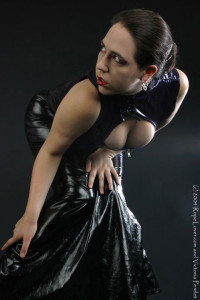 This becomes a community journey too. Does women’s only space become women (of cis-gender and trans experience) and transmen too? Some say yes because there are so many transmen in that group who literally founded the group, for whom the women’s community is all they have ever known. But when a transfags corner ends up happening that excludes the women there… this is indeed political in its orientation and play experience. And if they let everyone come in except cisgender men… has it become a space of exclusion rather that inclusion? On the flipside, there are women’s only community spaces that say women only, excluding trans women (if discovered for trans) and trans men alike. And as for gay spaces… there are some that don’t care, some that are cool as long as other men in the space don’t complain and you don’t cause ripples, some that require cock checks, and some that invite. There are also some that actively excluded until one of the organizers had sex with a transguy and wanted his lover to be able to show up (just sayin’).

This becomes a political journey too. With bathroom politics, requiring transmen who “pass” to use the women’s room because of their birth certificate, when they are invisible as men, causes disruption to the “safe space” of the women’s loo. With trans visibility and activism, transmen often physically become invisible on a more regular basis, and thus their presence alone often does not bring awareness to the number of folks who are trans. When we check “male” on a form, folks would have no idea, in many cases, that our bodies are laid out differently then other men that needs consideration medically, including access to obgyn care.

But I asked for this, didn’t I? I asked to sit here at Kaladi, to drink my coffee, to have folks ignore me. I asked to just be a guy, one of the throng. In asking, I gained additional privilege, a white, American, college-educated male, not struggling with poverty on a daily basis. I have become invisible. I am not consumed or seen. I am no longer a corseted 38DD-28-42 fetish model, seen and consumed. I am no longer even a casual, frumpy lady… seen anyway because women are consumed, hooted at, commented about and criticized for every move. Where the red carpet dress is often of more commentary than the moving speeches given. That the Goddess being praised at the Emmys.

We dissolve into the crowd. We transition and vanish, a magical act for the ages.

I become invisible. I breathe in, release, smooth out my purple sweater, and enjoy my muffin, just another guy at the coffee shop.