Anchorage looks different when you are wearing a suit. Especially when surrounded by drunken pirates. 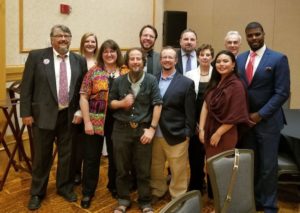 The ACLU table at the NAACP dinner had a lovely evening.

Tonight I had the absolute pleasure of attending the NAACP gala dinner in conjunction with the Alaska Oregon Washington State Area Conference. Earlier in the day I’d helped run the Transgender Leadership Alaska (TLA) statewide meeting, and during it one of the folks from ACLU had asked if anyone had wanted to attend. With no set evening plans, other than a desire to finish making the peach vanilla yogurt I had started soaking 2 days ago, I was delighted at the chance.

Heading home, I laid out shirts and ties, a bed covered in greys, purples, whites, greens, and reds. Finally, I settled on a charcoal grey suit and jacket, black/white fine pinstripe shirt, and a black/white/grey plaid tie. Then the art of the dude came forward, gifts from my friend Circle23 years ago – can I carry everything I need in my pockets. Phone, check. Wallet and keys, check. Battery pack and cable because the phone was dying, check. Pens and two different types of business cards (mine and TLA), check. A drawstring bag of different types of PRN meds, check. Shoulders back and deep breath in, check.

Off I headed. And proceeded to miss the bus as it drove by, not stopping as I waved.

Anchorage is one of the consistent cities when it comes to google maps and its transit catalogue. It’s always within a minute or so – I just need to remember to always be places a minute early. That said, I was able to hop on the app and find the next bus, a different route around the way, 20 minutes later. What a blessing, a chance to grab a latte before I fell asleep at my salad.

When wandering Anchorage, there are many different looks I have worn. Jeans and tee shirt. Button down shirt, slacks, and wing tips. Tank top and shorts. Whether I wear large gauge earrings or a noose ring. Styles of glasses. A kilt or a clown costume.

Whatever wardrobe a person chooses, it changes the world around us. With each of us being a projector screen upon which the world tells a story, our wardrobe and other presentation seeds that story. We cannot control what someone projects, but what we wear can change that projection.

Seeing me in a suit tells a variety of stories on a Saturday night. Work function? Yuppie default wear? Rich guy? Date night? Am I in the wrong neighborhood? The right neighborhood? Just getting out of the office? What career does this guy have? Should he be here?

Then there is the story of how a person should interact based on the assessment of their own projection. Some people began to ‘Sir’ me that would never have done so in my cargo shorts and nose ring. Others nodded, and a few gave flirtatious eyes. Some gave me distrustful glares. I had folks start telling me stories, some get out of my way, some get in my way. By donning this drag I am taking on the privilege that comes with the stories of this drag, some stories that are mine and some that are not. Having recently read a wonderful article about how folks of different racial background take space (or need to), I remembered that when in this garb it was especially important for me to keep it in mind – funny in a way as it should always be in my mind.

My garb has hacked me. The way I think, the way I move, the things I react to.

Arriving via bus, the only guy on there in a suit, which elicits a few looks – I begin walking to the Marriot. I run into someone I know from the Fair Anchorage campaign and head upstairs, remembering the first time I was here. The Imperial Court of Alaska Emperor/Empress contest, when I first met a few of the leather men in town. Men who proceeded to stop interacting with me when my female partner came up. I did not change, but the projection and the screen both had.

What a feast for the eyes.

How people define wardrobe for a gala varies wildly in Anchorage. I first learned this when talking to someone about the Opera. Standing at the line for the over-priced beverages they saw a woman in a little black dress and pearls, perfectly put together in glamor and elegance. Next to her, a man in Carhartts. It is one of the cultural quirks here, and a beautiful one at that. Social spaces like the Opera are not limited to those who can “look the part.” If you can get a ticket, you can come, a ripple left by people making money on the oil pipeline and thus all you have in Carharts. Your good Carharts mind you. It comes from people living out in the bush, people living on the land, and no matter who you are, having choice. That doesn’t mean people won’t project on you – it just means we draw the lines differently up here.

Coiffed men in slick back suits evoking the 60s. Beautiful lithe beings in long-line plaid suits that marry the 70s and today. Dena’ina women in kuspuks having conversations with women in ball gowns. Little black dresses side by side with Carharts and sandals. Glory and simplicity. Head wraps and kofia. Brilliant conversation piece jewelry and bare necks alike.

And me, in my charcoal grey suit with blacks, whites, and greys. Little round gold glasses, one gold ear stud, neck tattoos (tattoos that, according to the guy at the bus stop, are very similar to that of a gang in Juno called the Crimson Claw, so yeah… good to know).

Each one gives a place where our human mind projects. The trick is to not confuse the projection with the reality of the person before us. 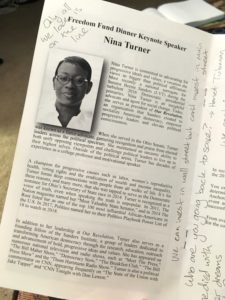 Having claimed the stage she left it and walked the room, blue flowing gown carrying her across the waves of emotion she made. She reminded me of, well, a lot of things that I need to remember in my advocacy. The notion of who are we going back to save for example? She evoked Harriet Tubman and reminded us that Harriet did not flee once. She got to freedom then came back to get her family. She got them to freedom then came back for more. And did more.

Who are you going back for?

She hit me in the chest with the powerful line – We can invest in wall street but can’t invest in main street. And then again – We can’t have a testimony without a test.  I had to pull out the flier to take notes all over it lest I forget. Forget that she talked about her mother dying young with her dreams deferred. That we can’t ask others to do more for us than we do for ourselves. Let I forget her grandmother’s wisdom that each of us needs three bones – a wishbone, a jawbone, and a backbone.

It wasn’t a perfect dinner. I managed to drop cheesecake on the water glass of Christopher Bruce. Fooey. But, it was a lovely evening overall, and afterwards I needed space. It was too many people in a crowded space. So I began to walk, grateful for a mind full of inspiration. Aspiration. Hope. Thoughts. 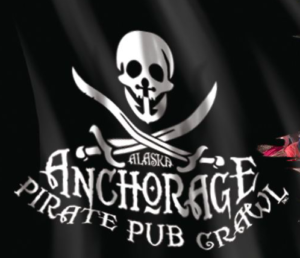 So where did I go? I wandered downtown. And wandered into the Pirate Pub Crawl.

I find it interesting that so many people choose the exact same pirate. It will be red, black, and white. There will be specific cuts of corsets, and there will be many red head scarves. It was a sea of rippled romanticism that had little to do with actual privateers… and it wasn’t supposed to. It is bonding over pirates, connection over the fact that all of us are having fun speaking with accents. Exceptions existed of course. The cadre of renaissance fair staff whose outfits impressed and glare at me matched in passion.

Glare? Oh, right – now I’m the guy in a suit walking through a sea of pirates. I was breaking the mood, I was in the wrong place, I was a reminder of work, I was many things that were projected by a new set of eyes.

Before heading away from downtown though, I did see one costume that I have no idea what to project on it.  A person in a trench coat and giant brown horse head, walking holding hands with a spandex-leggings-clad gender-flamboyant pirate.

No idea. And? I’m perfectly happy with that.