Say Their Names – Memories of the Trans Dead

The snow is falling on the pages. So many pages. Every name or two I wipe the pages off, white obscuring the blood shed beneath. 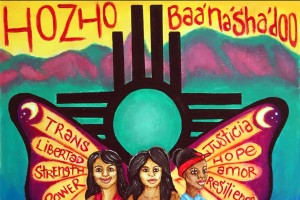 Started originally as “Remembering Our Dead,” the numbers of dead have been tracked since that time. This year, we lost 22 people in the United States and 317 people worldwide according to a compilation between this list put together by a reporter, and one by the Transgender Monitoring Report. Last year there were 11 transpeople killed in the United States… it is all so staggering. Just a few days before the event this year, there was a transman brutally maimed and killed in Japan… 318.

In the past 2 years, there has been a slow shift from Trans Day of Remembrance to the notion of the Trans Day of Resilience. Supporting especially the challenges and resilience of transwomen of color, the concept has also been taken up by other trans groups to celebrate those who still live while acknowledging and remembering those that have died. Have passed…

But they were murdered. Killed. Had their lives taken. 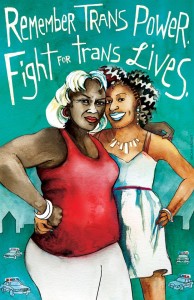 I am screaming on the street corner outside the cafe, my knees in the wet puddle that was snow when I began. 318 names. One by one I say their name and the cities where their lives were taken. Because we don’t know where they are from, only where they died. Anger, fear, their names echoing out into the night.

Last year at the University of Alaska in Anchorage, names were read. Reader after reader, the list was read with the names appearing on a screen behind them along with an image of the dead if they had one. So many were trans women of color, so many. They had begun with a small presentation on non-binary gender expression in Alaskan native populations, and people telling their personal stories. But then the names. The names.

This year, the event was sponsored by Identity, the local LGBT center. Hosted by Snow City Cafe, it had great food, live music, a larger diversity of attendees. There was an auction to support the local transyouth group. It was sweet. In the background, the slideshow displayed local trans folks alternating with the names of 15 of the people who were lost this year. Not lost… killed.

A homeless Yupik man kneels down next to me. He puts his hand on my shoulder, somewhere near the end of page two. I’m not alone, I hear their names too, he says. My volume drops but my anger stays, my bitterness, my rage. Page two, page three. Mercedes Williamson, stabbed and buried in Mississippi. Almaroof Bijli, whose burned and mutilated body was found in Gungal, Pakistan. London Chanel, stabbed to death in Philadelphia. He sheds tears, his hand on my shoulder.

uicides in the United States that were known to be trans related. No, but thank you for bringing it. Do you want the updated and compiled list from the United States or worldwide. No, they are only showing the 15 from the US, and they’ve decided to not read it out loud. My brain spins.

It is a lovely gathering. I get to meet MoHagani Magnetek, a local poet who I had talked to online before. I connect with some local service providers, some faces from the gay community, and learn from a 13 year old all about his love for hot peppers. Nice folks. But, my head keeps kicking at me, it’s not supposed to be happy. This is a remembrance, or if you want to go this direction, a wake. Only 15 names scroll by… not even the 22.

The organizer, mid event, reminds folks that it’s not only the names on the screen, but that Lee had pointed out that we need to remember those who killed themselves. I politely smile. They never say the names.

Power comes from reading names. Saying them out loud. This is why saying the names of those who have died has been so important to the Black Lives Movement. To not have people be statistics. To remember that people who have been killed are PEOPLE. 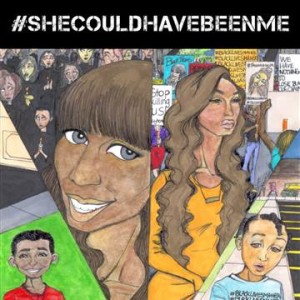 That is 26 trans or gender-spectrum people killed in the United States in the past 15 months. 22 or 24 in the past year.

By saying their names out loud, they become PEOPLE, not statistics. The same is said of prayer, of studying for tests, for committing to doing projects. When we say things out loud it goes from being abstract to being concrete. People deserve to be concrete. Let them be concrete.

By the time I shift to the list of suicides, my voice has become a whisper. I can see feet gathered around me, people in a small crescent bearing witness. I bless their memories, speak their name. Ask if anyone else has something to say. The Yupik man offers a prayer in his tongue, and hopes they are in heaven. “Or wherever else they are called to be,” I softly respond. We all breathe in, let go, and I fold up the bundle of names.

Surrounding me are two Lutheran ministers, one of whom I had mentioned to that I would be outside. A friend who had mentioned on facebook that she was sad about the names being skipped- a message I happen to have seen and she and her family had driven back to the site. A few others. I nod, and they nod back. Slowly creaking, I stand, my denim soaked. The Yupik man is walking away with his stained jacket and heavy bag. I give thanks to the ministers, to the friend, talk to their child and finally meet their partner. I clutch the list in my pocket, and walk off in the other direction from the man, into the snow that falls like a veil.

Let us all be concrete. Say their names.