Our conversation crisscrosses family trials and tribulations, my cousins she shops for, the aunt who keeps losing weight, the new jobs and hobbies. Conversations shift to holiday gifts and things people want. She doesn’t want much she says. She has a set of dishes that work really well for her, recounting the litany of truths that spell out its sacred qualities as the perfect set for her. She has linens, clothes, and can get a steady stream of vampire fiction from the library. Anyway, who would want any of her stuff she might get when she is gone?

My mother owns a mandolin. She does not play the mandolin, and does not really have any interest in learning how to play it. She doesn’t really know why she purchased it. It sits in her bedroom in one of her areas constructed that feels right to have it that way. A place I would call an altar, a place she does not name.

She says that no one would want a mandolin when she goes, so why should she have gotten it? Her home becomes an estate sale before she has died, names attached to the goods in her home. The girls will get these, my sister in Idaho might get these. Who would want any of the art? And her dish set, sacred and perfect in doing everything she needs from a dish set for her… no one wound want and understand it. They retail so high because so few are made, because of how perfect they are at retaining temperatures, being able to be baked or microwaved, for their classic beauty. They would sell at Goodwill, no one would understand what they have in their hand. 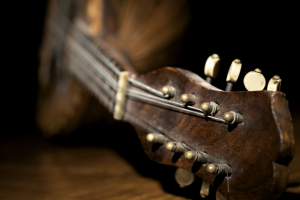 What I want to rant is that it is her mandolin, and that she is the mandolin’s human. That the mandolin and her are with each other and it’s none of the rest of the world’s business that their relationship doesn’t make sense. That they are both happy, and the nay-sayers have no place in speaking.

What I want to so is scream that she is still living, that she doesn’t have to live in an estate sale. She doesn’t need to tailor her tastes to what the nieces might like.

What I want to cry out is that I see the shadow of her mother’s death sitting like a shade next to her at the table. That she’s holding it’s hand instead of reaching out to hold mine. That her mother passed away just a few years beyond her current age and I know, I know, she’s afraid that just like her, someone will have the boxes of her life stacked up in their spare bedroom and it will hurt to see them. Because her mother is still stacked like cardboard boxes, and she is able to go through one box a year.

Then it becomes the shake between gentle folk, the shake you might make on a deal between a farmer and a customer buying her lot of corn and barley. The shake that is simultaneously thank you for your business from a place of pride, and thank you for taking pity on me and buying my goods so that I can afford heat this winter. I feel my heart ache, such a deep ache. Not of pity, but of a wish that I could plug in my love to the radiator in her spirit and heat her up. Heat up the holes and the sorrows, the trauma and the turns she took for others and the pain others left.

But more than that, I want to plug in my heart and somehow download the truth that YOU can go climb the Great Wall. You can love deeply while not being used. You can line dance under the Eifel Tower instead of being stuck in a hotel room for a weekend.

With a calm, I look her in the eyes while she tells me that if she could live it again, she would do it all differently, other than me. She would have me all over again.

I try to share that she can go climb the Great Wall, that she is still alive, that she is still here. But she shakes her head trying to shake me off, shake off the thought, shake off the stories and ghosts and all of the words and whispers and angry poison packed into her head from her past. She shrugs, an uncomfortable half-smile, half-frown that says more than either of us want to say. I try to keep my loving eyes, my open heart.

She asks me if I want tea.

And whether I like it or not, I see the shade. I ask the shade if she could give my mother space to live… but all the while, I enter the estate sale and debate who would find a home for my mother’s mandolin, who I might find to care for her unlikely spouse when she is gone.

And I have a cup of tea, thinking of her mandolin.

I wrote this a few months ago, and it sat and sat. Last week I finally talked about some of these topics with her… and some day I will share where I went since then. But I was unwilling to let this post go out until I had done so… and now I have. Blessings and love all around. -Lee