For the love of corsets

This weekend in New Orleans I was part of an amazing performance weekend for the Palimpsest Novel book tour.  Performing on stage with the likes of Catherynne M. Valente and S.J. Tucker was such a joy, with the audience decked out in finery, masks, steampunk gear, and maps writ upon their flesh.  Trains of heaven had snaked us from Chicago to the Bayou, and I was in bliss having never been to the city before and getting to do it surrounded by some of my favorite people.

But neither the show itself (including me spinning poi on stage for the first time in 3 years,  me doing arial ropework involving a really powerful piece about emotional angst and rape, or doing ropework on the floor that involved the painfully cathartic work of destroying a novel ripped from the bound author’ hands) is not what I want to write about today.  Its about my green corset.

We all have that one piece of our wardobe that has seen so much, done so much for us, with us, against us.  It has been there during the hard times and the good.  It has seen us fat and thin and every shade between.  It has laughed at us, supported us, held us.  It might be an old brooch or a favorite pair of shoes, a scarf or a coat.  I have a number of these, and this corest is one of them. 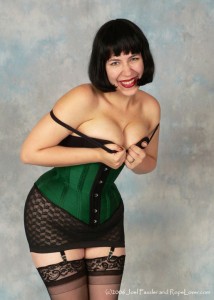 Green Corseted as a Woman

I got this corset from Morganna Femme Couture many years ago as a custom piece.  I loved it, though snapped the front busk quickly, shipped it back and the second held.  I tend to be hard on my clothing.  It is emerald green silk duploni and it used to fit like a glove- I could tightlace down to a 38D-28-42.  It was amazing.

I gave away most of my corsets, or sold them, or traded them, when I gender transitioned.  Firstly, no longer having breasts, over-bust corsets were silly to own.  Secondly, though I still identify as a drag queen, its been hard to get “girly” when trying to train folks to call me he.  I apparently confuse, baffle, make it hard for folks. But I had to keep this one, my orange and black PVC one by the same maker, and my leather waist cincher from another creator.  I could not would not part with them.  But neither could I wear them.

I have worn a corset “out” twice since transitioning until this weekend.  It was Dark Odyssey Winter Fire 2008 for the formal dinner.  Stockings, girdle (the one shown above), super-tall stripper platform heels, layers of black satin skirts and crenolines (long in back and short in front), tight orange and black corset, custom orange and black tall anime wig from Peacock Blue… eyeliner, glitter in my beard, and a flat chest under a black shirt.  People were baffled and yet had fun… but those who had known me as Bridgett (above) tripped over their tongues, unsure how to address me.  The femme fag boys were very supportive and loved it, and me. It was good.

But I haven’t had the stregth.  Emotionally.  The whole drag queen thing is a lot of work, and currently rocking an amish-style beard I realized I need it.  The beard.  I don’t get she’d.  Ever.  Ok, except on the phone once in a while.  I love being being high femme fabulous for an evening, but if it means I have to shave it all off which will lead to me having to juggle the depression and frustration of getting she’d again… I just don’t have the strength right now.

So the corsets have lay quiet, borrowed by friends or just bundled and safe.  They lay fallow.  They were untouched, unheld, pulled no skin tight and forced no lungs to contort. 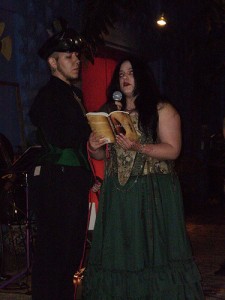 Wearing my Green Corset as a Man

The night before leaving on the trip I had a hair-brained idea and put it in my bag.  Black boots, black trousers, black shirt unbuttoned under the corset showing my chest fur.  Hat, goggles, key on a necklace, leather fingerles gloves.

It was good.  I’ve put on a lot of girth since going on testosterone, so instead of closing it it was open 4+ inches in back, and yet the look was still very dramatic.  Perhaps moreso because most folks in the audience had no idea I had ever lived, loved, and dressed as a woman.  Had no idea that once I was the woman above.  They saw a bearded young man with a 32″ corseted waist wasped in and gasped.

I could only wear it for an hour.  Costume chaanges, and I was out of practice.  It was good though, if hard.  I kept fearing that people would know, would care, and yet I knew I had to.  For me.  And in the name of art.  I’m still femme, and sometimes, I need to accept, that that means my love for corsetry needs an outlet.  I won’t be shaving my beard any time soon, nor my legs, but the boning is needed, the cotortion of flesh.  I need to feel it, to see my waist cinched in, to feel my power over my form, to feel light as I dance and laugh.

My love of corsets has not faded.