Home Journeys of a Passionate Heart Each Small Thing

I round the corner, and freeze in place. Eyes wide behind my mask, mouth half-open behind my shield of white. The older man is sitting in a high-backed chair in his library, and from my angle all I can see is his pepper-grey hair, his suspenders over a white tank top, his black tuxedo pant leg. The younger man pulls out the older man’s shoes, and gets down on one knee before him.

Some part of my mind pegs them as being in their late 40s and early 30s, but what matters more is his head lowering as he slips the shoe onto the foot before him. Tender firmness. Knows the foot so well that he tightens the laces of the seated man without a word. Smooth and loving efficiency. A handkerchief comes out and polishes the toe, before moving onto the other shoe, other foot, other laces, other leather toe brought to a shine.

In full tuxedo, the younger man stands up, and goes to grab the man’s button-down shirt. He slips it over the older man’s shoulders, and together they button it up. The younger from the bottom, his body bowed elegantly, but as I watch I am all the more enraptured at the sensual tension suggested. Buttons in the front done, he turns away and gets his vest next as the older man tucks in the shirt and pulls his suspenders back up over the top. Layer after layer, until at last the bow tie, the tuxedo jacket.

They pause, a glimpse into each others eyes that last forever. The bowtie is tightened down, straightened out, and the older man reaches up to do the same for the younger man, then looks into his eyes. The older man puts his hand on the shoulder of the younger man with a lingering firmness, then pats him hard twice, and they walk off together. 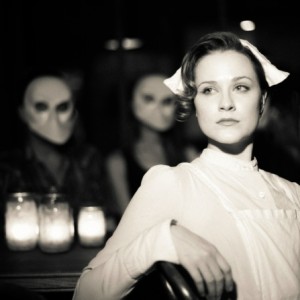 Clad in masks, the audience of Sleep No More watches on.

This was the simple, yet breathtaking, scene I saw last on Tuesday at Sleep No More.

For those unfamiliar with Sleep Mo More, it is a retelling of the tale of Shakespeare’s Macbeth. But phrasing it that way is a bit too simple. The set is 5 stories tall, and you begin in the bar on the 2nd floor. Each person’s journey is different, though it is possible for folks to find each other again after a while if you know what each other are wearing I suppose. Why clothing? Because audience are silent and wearing masks, while the actors are not. Silent, for as long as you are in the show/experience.

I wandered. I followed. I sat. I read books that were not tied into the plotline.

Some audience followed specific actors, running up and down stairs to follow plotlines of one character through the night. Others explored each floor as they could, hands along walls to find hidden doors – though throughout the night different doors, experiences, scenes unfold.

I will not share what they all were. And – I know I did not see them all.

But bodies danced across ceilings. Lighting strained and shifted, trees slid forward, wine was poured, lips met lips and sparking dresses pushed angry against glass. Desperation, pain, moments of love. Hope, and death by the sea. Macbeth… and yet less… and yet more…

The rituals of service have a resonance in my flesh. It is often not the big things. It is the silent handing of a glass of water as I type. It polishing his boots so that he can walk with power, imbued with my love and dedication. It is seeing her iron my clothes as I prepare for a class.

Sometimes it is simply what we do, actions in any direction, that help each other. But the moments of awareness are what trigger me. The knowing. The hand brushed against the brow that says I appreciate that which you give. The smallest nod. It is even that which we are, that which we do, that which says to each other that there is connection in this act. There is a place for each other in this moment.

I can get my own glass of water. I am a functional human being who can care for myself. Okay, most of the time. Okay, a lot of the time, but I am far from perfect. But having her bring me that glass of water says that she thinks of me as well, that she is part of my world, that she is even a part of me. That in this breath we dance in the space of appreciation.

In class in Raleigh, I look down for a bottle of water, and 2 now wait for me. No acknowledgement needed. No reason to make the flow stop. This is different from someone bringing me water and having me have to stop class so that they can hand me a glass of water and demand an acknowledgement, unable to let go of the glass until I see them. This is not being a bad person, but it is dramatically different in forms of engagement.

The first, in my internal lexicon, predictive and silent service that keeps us both serving the world. They bring me water before I know I need it. I reach for the water, internally thank them, and am able to keep speaking the words that shift hearts and minds. They, through their service, have my work become their work as well. They are shifting hearts and minds through a bottle of water. Without them I could do my work, but it is more powerful with this bringing of power to the moment.

The second is about the person bringing the glass of water and me. It is not about the room. It is pausing from the work I am doing to have that moment between two people. It is the room seeing them, and giving them all their attention for the moment. It shifts the focus, and then we shift back. Not invalid, but different.

When done with grace and beauty, especially with those moments of hand on the shoulder of the younger man, both clad in tuxedos, engages my being. My essence.

Doing stuff, then, is different than from Service.

In the notion of **love languages**, one of the forms of love is “Acts of Service.” I realize in this that when they say acts of service, they are not saying that we show love through getting stuff done. There is, perhaps then, a statement of doing the Service with an open heart, doing what needs done to make the flow of the world operate for the better of all parties. I show you that I cherish you because I make the bed, so that at the end of the night you can crawl inside it with it being perfectly presented. That for myself at least, a made bed at the end of the night says that I can breathe into the place of relaxation. That a messy unmade bed at the end of the night reminds me that my day has had chaos, and there is a likelihood that that chaos will continue into the night and next day. It is me resetting – and having that bed made, by myself or others, is a gift towards the night and next day.

Acts of service have nothing to do with orientation, with who is a breadwinner, their honorifics/diminutives, what jewelry they wear. Acts of service, in this moment of writing for me, is about the idea that together we move together better into the world. That the Work that needs done fuels through each other. Making money for a household becomes Service to our family, so that a spouse can go to the PTA meeting, so that our children can succeed, so that love can bloom in this generation and beyond.

He is on his knees, lacing the older man’s shoes on. At home she is dusting the light fixtures. On the road I am finding my voice of dominance anew and dusting it off. We build our future, and create today with each small thing.