Five States in Four Days. That’s the plan. Tristian picks me up at noon and we head up to his place to grab my books and for him to do some life-at-large stuff. I feel touched when I am given entry into people’s lives, homes, families, friends. So often we only know people at clubs and have no idea what their fullness of being looks like. We do not know their names, but know the shape of their cervix. We have seen them bleed, but have not seen them squee in delight about quilting.

Two hours later we load into the cars and head out. I fall for Drop Dead Fred when, at a gas station, he changes shirts and I see his Baphomet tattoo. I already liked talking body mod stuff with him at the munch, but he unfolds in awesomeness with discovering he and his wife Mrs. Giggles do kinky clowning, and that he has a truly wicked sense of humor. Okay, for some of my friends, a blue-haired, stretched ear-lobe, tattood evil clown with giant inverted pentacles on his shirt might be a picture of their worst sort of hell… but I fund myself with a huge smile. Grateful for the little things, I tell him about part of the big ritual from the first Dark Odyssey Fusion. Somewhere, miles away, I know that the altar of Baphomet has a good home, and my thoughts of Ravens_bitch make me smile.

We make our way to Mobile, Alabama, and I can say that I have seen a profoundly small part of Alabama. How small? One oyster house, and one private dungeon. But you know what? That’s not a bad part to have seen. Over dinner, with a sea of new faces (with Tristian, Fred and Mrs. Giggles as my touch stones), I end up seated next to a woman wearing an ankh. Suddenly, the world becomes impossibly small as it turns out we share magical working families. A three-way text between the two of us and a mutual friend ensues, Ohio and Alabama sharing a meal together in the weft and warp of it all. I also get to learn about the fire-rope suspensions Verita has been doing, and end up nerding out with her about how crappy Kevlar-thread rope is for any tensile strength once it has burned at all, about how many different systems she has in place not just with her ties but in training her bottoms in advance. My concerns about her doing the shit that I had seen and judged goes away- but I still worry about it being emulated. Her shit is pretty spot on, and seeing her rig twice later, I’m in nerd-rope-sibling-love with her. But I don’t think some folks are doing in to that degree of care and attention.

The rope flies that night at Les Bons Temps. We did a bonus speed-bondage class for folks who showed up for time announcement #1 as we wait for folks who got time announcement #2. Because this shit happens. All the time. All over the place. And I am a big believer that we shouldn’t punish either party, so we just do extra work together. The rope is flying as they learn tips and tricks, and lots of giggles happen too. One woman just starts petting her rope, and bliss ensues. 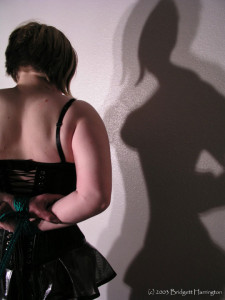 Decorative ropework and erotic macramé. I love this class, because everyone gets to have fun. The advanced students get AP (advanced placement) assignments or do their own higher level work as we get the basics down as a team. Trying out body harnesses with twists, butt bondage, chest harnesses. Happy twists in conversation come as we discuss modifying ties to work with the bodies of the models, and riggers, in questions. I get to tell the world about the awesomeness of Master Jack, the one-legged suspension top who threw me around so well when I worked for Bondage-Arts.com. Smiles, show-and-tell with each other in the room. And then, the party.

Les Bons Temps is the building of Lord Valentine and Ursa Madre, who are practicing pagans. Though I had seen his pentacle, I did not place that this might have any effect on the venue, until I actually got to go further than the room I taught in. I turn the corner to grab a cupcake (nom nom baileys nom) and my eyes widen and heart opens wide. The sunk-in living room has been converted into a huge temple area, spotted with statues and iconography, Buddha and Bear staring at me from above the fire place. I am hit with a wave and just… sit.

In the temple a rope scene is being set up, and my eyes are transfixed on the whole setting. A blanket is laid out on the ground and a basket full of rope holds the tools for their journey together. They pull out their own speaker system and play their own mix… and as the first song starts and the Bottom’s eyes close, I am so moved. Then “Same Love” by Macklemore, Lewis and Lambert comes on, and another couple watching near me begins to pull out their rope, and the wave then moves through them up to me. I take off my shoes, go grab my blue rope, and come back.

My legs fold lotus and lash in place, dancing through the sounds and the ripples of rope energy. It is like dancing in the waves, water splashing, no rip tide at all. It is a pleasure as the silkiness slips around my waist and my rigger myself binds lines around me and tightens me in. I stretch and move, fold over and pull back, before I bind my face in a layered head cage of bulky blue. The nylon slithers along my skin and I sigh, smile, feel the jute creaking next to me, can taste the shiver of the bottom in the temple leaving back against her rigger. I pull the lines down my face at once, cheeks aflame with sensation, and then bind down my face to my ankles, then back to sitting, then bend prostrate once more. Blind still I move, change, transform. Soar in the waves. We are three scenes but we are one, or perhaps I am just feeding. But this was freely given, we all understood. I knew them all when it comes to these topics, and we were sharing this temple, freely given. We are free, we are given, we give into the rope.

Eventually, I untie my last lines after dancing with ropes like wings. As I coil my ropes, I see the second couple begin coiling their ropes. The energy is being coiled back up. The couple in the temple says something and smiles up at me, but I’m not back yet. But the music wraps up, the temple rigger coils up, and slowly, we return, we return. The work draws to a close, and I bow to Bear once more at the altar. Blessed mother, blessed mother, thank you.

Quality conversations. Deep hearts shared. I learn about being a switch in the rural south. I hear about D/S couples and going to church with their kids. I meet Alabama fetish models. I laugh with femme dommes about evil machinations, and discuss “dance club bisexuality” with the swingers in attendance. From the outside, it’s just a ranch-style home. But inside it is a temple, and tonight it is a co-created space crafting safety, exploration, delight. In Alabama. Because our tribe is everywhere.

Tristian takes me to the home of his Mistress, Laughing_Goddess, who is lovingly housing me for the night. I throw clothes into the laundry, and get ready for the next day. Tomorrow it’s 2 classes and a party, and who knows what else it will hold. I try to sleep, and fail. Eventually I get there, but it takes a long time. Because sometimes brains do that. So be it. But the bed is lovely, and in the morning, I wake to the smell of a home-made southern-style breakfast.