Dusty With Their Memories (Dirty South Tour Part 4 of 5)

I heard something vaguely vibrating across the room. Waking up and shambling out of bed, I made my way to my bags and looked down at the phone. Missed call from my ride north. Frak. 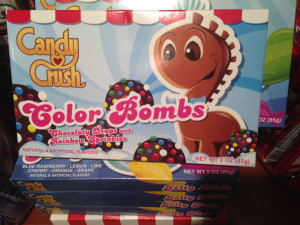 Looking at the phone I also noted the time. 6:15am. Frak frak frak. I was supposed to have been up at 6am and out the door at 6am, frag. I run downstairs and there they are with a smile on their face, my lovely pair taking me north. Elizabeth had never been to New Orleans before and the gent she was with loves spending time with her. And here I was in pajamas. They laughed and said it was all okay. Upstairs, quick shower, bags together, box of books grabbed, and off we go!

Cracker Barrel was a quick breakfast stop. I was deeply amused at the Candy Crush candy… branding is always fascinating to me. I joke that my current thumb injury is based on “candycrushitis.” I tried it for about a week, and my already randomly tender thumb and forearm has become nearly unusable. But that was neither here nor there. I was not planning to give Cracker Barrel another penny beyond my egg white scramble. 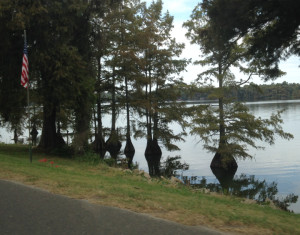 On we roll. Cypress trees and cotton fields. Long rivers of concrete that we paddled along on 4 wheels. I’d never seen cypress trees before, growing out of the water with beautiful roots spraying out in all directions above the water. Cranes took off into the blue. Such blue skies. 80 degrees and beautiful all around.

I’d only ever been to Arkansas once, on accident. Parker and I went to Memphis for a week on vacation, and one day were driving and got lost. Our mis-turn landed us in West Memphis, Arkansas. For 5 minutes. It was disgusting and scary. This was not emblematic of Arkansas. This trip… much nicer.

As the border between states we stopped at was perhaps the most beautiful tourist information stop I have ever seen. A lovely older man told us about local sights, and the pamphlets around the building were organized by country. And when we mentioned our next stop, he concurred that it was a good choice. It was… far more than that.

At the WWII Museum, there had been a short-run show on the internment camps (or relocation centers) for Japanese Americans during the war. Stories of barbwire fences and pledging allegiance to the flag. The artifacts of their lives they cherished and carried with them, and what was left behind. So many lives upturned. So many lives traumatized.
But when we got to the land where the internment camp had been, it was so… 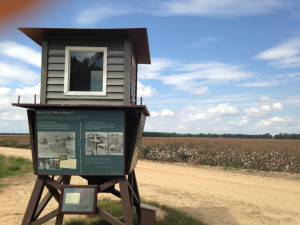 As you enter, they have built a small, replica guard tower. On each side, an information sign, and an audio button as well where George Takei was sharing stories about each of the topics that were on the information boards. It was… heartbreaking? Touching? Beautiful? Sad? 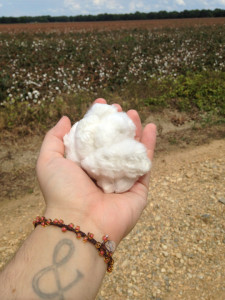 The land runs wide with cotton, puffs of white on dark green brown. I filled my hand with a few small puffs and felt the land. Felt its heartbeat. Wide and long, I could close my eyes and see a town of 10,000 people, small houses, schools and a hospital. A bustling town of enterprise, guarded by men in towers. My heart sank.

In the pit of my belly it rumbled, it’s waves dashing against the edge of my eyes as I read about the people on the outside. This is in middle-of-nowhere Arkansas. The people who lived in this area were profoundly poor and black. Inside the lines of wire, those who were relocated against their will were receiving three square meals a day, receiving health care, were taken care of. Outside the wire, people were starving and slaving over the cotton. I shake my head, breathe deep, heart at the bottom of the waves.

We walk down the road to the graveyard, a monument erected telling their story. Sad stones beyond that, names and dates of people whose bones never left. Who started elsewhere, and ended here. Their families said goodbye here. So far from home. 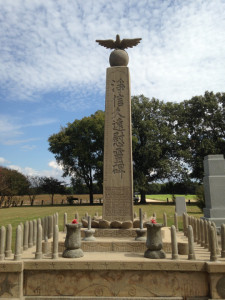 Trees and blue, stones and gravel, dust and cotton. My boots are heavy with the dust of their pain. My boots are still dusty with their memory. That is what I said to S.J. the next day when I saw her, and she understood.

May we all be dusty with their memory.

We looked at the time, having had a few wrong-turns and misleading blue-dots on the Google map lead us around, and did the math. We have to book it. Up the road, heading further towards Little Rock. Heading from rural lands towards the city.

We arrived at The Foundry, a lovely dungeon with ubiquitous black walls and spanking benches waiting inside. I had put on my button-down shirt in the parking lot, and for a moment pondered the madness of my formal existence that said that a button-down shirt, leather vest, and cover were good ideas in the south. Even slowly entering fall, it had been a warm existence the last few days compared to my Alaskan home.

We unpacked books, I straightened myself, and breathed deep. It was a delight to see so many new faces, but truly lovely to see Lagavulin. I’ve known him since ’99 or ‘00, when we’d met at Torture Garden. Hot play, good Chinese food, and more… and had not seen each other since then. Random moments of being blips on each other’s radars, but this was our first flesh-hug since then. Our lives had both transformed radically, but our car ride time the next day showed me that yeah, those kinds of connections, whatever they look like over time, never quite go away.
I had been brought in by MasT and Central Arkansas TNG, and it was a bit sad to not get to meet the lovely lady who I’d done most of my networking with, but such is life sometimes. Instead, without her, we discussed rituals, protocols, power exchange, and Walmart appropriate behavior.

What are some things that are appropriate to do at Walmart?

Bring a list?
Cool, that’s a personal protocol.
Don’t take up two spaces in the parking lot.
Great! We’re getting closer to a community protocol. So, what is a universally accepted protocol for Walmart shopping? Cover your genitals. Don’t pee on the produce. In either case, you will get kicked out, socially shunned, and/or arrested.
A kink community set of protocols are often not even the things it occurs to us to bring up. If you’ve been in the Scene for a while, it may not occur to you to say “don’t grab someone’s collar,” because that would just be a douchebag move if that person is not your partner or someone you have that dynamic with. But someone new may not know that that is a cultural norm or behavioral protocol amongst our tribe.

Star of India is a beautiful little place with food that made my mouth water and had my body wishing I had two stomachs I could fill. Seafood-filled creamy dishes that exploded in spices. Perfectly fried up cauliflower with fresh mint chutney. Naan that was deliciously prepared. And the owner, Sammy, knew Lagavulin, even if he had not been in years. The man had a knack for names, and called everyone who was or ever had come in by familial terms. Lots of playfulness. If you live anywhere near Little Rock, I cannot recommend them enough.

Back to the dungeon and I ended up doing a private rope lesson, which was a lot of fun, and watched a playful scene while enjoying a side conversation. Then off I went to my crash space for the night and enjoyed the hilarity of choosing somewhere for breakfast the next morning (why Monday, they bemoaned, why couldn’t it have been a Sunday morning). Finally, curled up on an inflatable mattress in a clean room of a beautiful home… I fell asleep, knowing that the next day would be so much fun.