Fresh-made biscuits fluffy in a bowl. Sausage crumbled into thick gravy made from scratch from a loving hand. Eggs, fresh fruit, cottage cheese, thick-cut bacon. I woke Saturday morning to the scent of a southern kitchen situated in Biloxi, Mississippi. LaughingGoddess and Tristian were dancing around each other in a dance that spoke of lives known to each other. Her other slave came out and joined us and food was devoured in delight, new faces being added shortly after as yet more came to feast. This poly tribe lit up my heart, as well as their guest who I talked with about Hawai’i, transsexuality, sexual explorations.

They usually host the classes for SMART at a private home venue, but with so many people RSVPd, they decided to rent a small hall in Gulfport. Squeezed into an open time space between a conservation group and a faith group of some sort, the flock of black jeans, cute dresses and smiles that descended was a feast for the eyes. People drove down as far as 2 hours north of Jackson, riding with folks from MALL to do a total of 5+ hours of travel just to come. Everywhere I turned I heard “I have not seen you in ages!” Family reunion for kinky pervs with 5+ groups working together to make it happen. 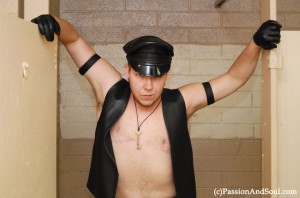 The class was the largest anything like this folks could remember with 62 people in attendance, not counting the little old man who owned the venue, and his dog, peeking their head in from time to time on the proceedings. The course was “Sir! Yes Sir! Exploring Protocols in D/s Dynamics”, and I stood at the front of the room sweating my gourd off in my leather vest and cover. I know, leathermen are supposed to not say out loud that we are suffering for our art, but sometimes we are. I rolled up the sleeves of my button-down shirt, but yeah, it was an intense ride. One I did to myself. Why? Because I know I carry a different demeanor and gravitas when draped in the stories of my journey. My keys on my hips, held up by the strap I was presented. My title vest. My master’s cover. Yes.

I felt like a channel. Pieces of that class sometimes fall out of my mouth to touch one person, but it seemed like every other sentence I said hit someone in a visible manner. Oracle of the southern sweat, a leather sibylline. Punishment v. correction. Household manuals. Nobles oblige. Systems that serve you rather than having to serve your systems. Having matter to not forget your own systems. Love languages. It rolled and rolled, and flew by in a blur.

As fast as it began we wrapped up, and I posed for a flurry of pictures with folks, signed books, had conversations for two minutes here, one minute there. Suddenly outside and packed up, I loaded into Mrs. Giggle’s fast black car and we drove back to Louisiana for dinner before the class that night.

I am not a big fan of all-you-can-eat sushi. Er, no. So when we got to the sushi place and the sign said all you can eat Chinese and sushi, I cringed inside a bit. I own it. And I was so incredibly excited to be proven completely wrong by Miyagi. 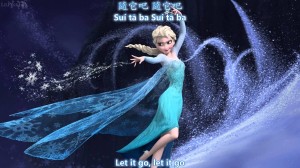 After seeing Tristian, Kupkake and others (including me) sing the Frozen “Let it Go” song (chorus in English, verses in Chinese- click the pic here to sing along too), I got to see the buffet- and see that they only set out one roll of each type at a time, and were hand-making new stuff as we all walked by. The red snapper was well cut, the spicy roll with tuna inside was fantastic (not spicy tuna, it was a keppa maki roll with some other things around it), and in general the classics were just done well. Being in the south there had to be something fried of course, and even that was a delight.

Mystical conversations, dumb conversations, meeting nice new people, and I felt so blessed. Even with the occasional cloud, the wind (and my mindfulness) carried them away as fast as they came, and the light endured through it all. So blessed.

House Je Te Vois is a two-story house converted into a pretty awesome dungeon/sex play venue. You enter into the social area, then kitchen, where I found a garage-turned-dungeon-turned-classroom. The room to the right of the kitchen was another very large playspace/dungeon. Upstairs were private rooms plus two more large play

It was awesome to have an unexpected crossover at the Sacred Kink class – someone from Free Spirit Gathering! To be telling my story of Whitney playing drums live in the Sacred Sexuality Beltane dungeon to be remembered by someone else there made me smile a mile wide. It was so empowering to hear kink Christians be up front in class (but mostly one-on-one) about how they did want to retain their faith and be the authentic sexual beings they are. And they can be. We all can be. I remember being touched on the topic by the story Lady Jazelle wrote in Spirit of Desire about how a scene she did brought her closer to Christ. I am pro-Christ, hell, he was a filthy radical hippie who was counter-establishment and pro-love. I’m all for it! Especially from Christians who are also all for others pursuing their authentic path too, even when it has little to no resemblance to their own.

The night was a raucous play party and feast for the eyes. Fun costumes, from full latex dresses to bimbo Barbie dolls, sexy clowns to dapper gentlemen in wing tips. Quite the food spread. Play all over the house, from group sex to take-down rope, sensual caning to me getting to have a littles story-telling moment. I scooped up a sweet baby girl in my lap and told her a bedtime tale about how Princes and Princesses all gathered in a castle in Louisiana and decided they could make the world a better place by being happy and showing the world they could be happy too. It was amazing to see her smile erupt when she looked up at me that yeah, the world would be good if we were all happy.

Tristian came up mid-story and asked to introduce me to someone… my rides to Arkansas! It looked like he had finally stopped panicking. I was being driven north for the other 2 classes, and we hadn’t seen them yet, and in front of me I saw them negotiate a visitation schedule, ha! That she took custody of me come 6am, and until then he would make sure I was fed, watered, etc. I was clearly a puppy that needed babysat. I wanted to laugh, but also understood it. And felt well cared for.

Many conversations later, with cheese grits, Nutella crepes and home-made banana pudding consumed, I finally tapped out to sleep. The party was still going, but I set the alarm and plugged it in at one end of the room where the outlet was, and slept at the other end of the room where the bed was. This… was almost disastrous. But mattered to me right then was getting out of sweaty clothes and into my clean PJs, snuggling in, and passing out like the pervy dead. Tomorrow would come soon enough, and my ride north.