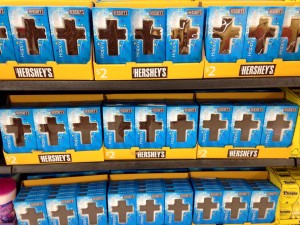 Yesterday I was at Walmart in search of Orange Vanilla Mio. I have developed a love for this stuff in my travels. Water flavoring that fits in my carry-on liquids baggie. I am a huge water-drinker, and having every other bottle be flavored is lovely. I’m not usually a Walmart shopper, but so be it.

On my way in, I was struck by the following sight. Giant, chocolate, crosses. You can find a wide variety of Easter candies in the world, with eggs and bunny type things that are far more evocative of Ostara (the pagan Spring Equinox cross-quarter sabbat) than they are of Easter. Celebrating the Resurrection of Christ is a fine and dandy holiday, full of inspiration and beauty. But…

The capitalism bothers me in our holidays nowadays. It’s gotten worse and worse. It’s a bit of an emotional trigger based on my childhood behaviors my father did. Consistently, the day before Christmas, he would realize that everyone had gotten him presents under the tree and that he hadn’t gotten any for anyone. He’d take me to the mall and walk around getting stuff from the main corridor, not even going to areas of things folks might actually want. It rarely was a good fit for anyone, and the cheap necklace and pin that he got mother one year was the final straw in any sort of hope on her end. There were MANY other layers there, ones that are not mine to tell in a forum like this… but I have kept that necklace as a reminder in my life of so many lessons.

I’m not sure why this specific image caught me, but it did. I posted it over it on Facebook and the responses came quickly. A lot talked about it being a symbol of suffering and execution, a perpetuation of a culture of war, murder and other offenses. Others shared the Tom Waits song. There was the obligatory link to other blogs who have talked about it already, and whether Jesus was ever real. And the countering with alternative candies such as the plague frogs made of chocolate, and Jesus’ suffering jelly beans. 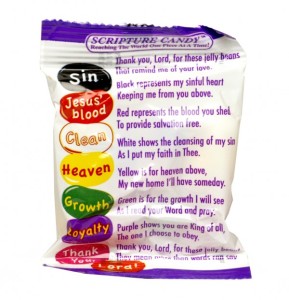 But what stuck me was the Christians and Catholics who were touched by the image of the Chocolate cross, or at lest not ruffled in the slightest. Those who had grown up with it as simply an Easter candy, or more so saw the cross as an inspiration to rise to one’s fullest potential. I saw in this concept the idea that those who are inspired by Christ’s sacrifice are touched to become worthy of that sacrifice and live up to be a people worth saving. That we as humans learn, that we can become good people.

Those who are moved by Christ are touched by different faces of the man/character/figure/deity/individual/avatar/messiah/prophet/persona (based on however they experience the Christ/Jesus/Yeshua). Such it is for the symbols that touch is in recalling them.

There are those who choose to remember Christ as the fisherman and bringer of food (the fish). Others as the son of god who sacrificed his life to inspire up (the cross). Some as the child born to transform the world, which each child has the potential to do even if not in the same way (the manger). Some through the power of the guiding and loving feminine forces who supported him (Mary or the Magdalene in her loving portrayals). Some as the revolutionary (the overturned tables and speaking in the streets, like a man who tattoo’d christs’ face with thorns on the head and went to punk concerts to preach the word). Some as the mysteries of what comes after and the revelations beyond death (shroud of Turin, the cave/boulder)… and more.

We each see different faces in the same tale of inspiration.

We each react from within our own stories.

I was hit once by the work of Paisley Yankolovich. At the first show of theirs I ever went to, he stopped mid-concert and asked who of us had ever been hurt by a Christian. Now, Paisley is a hard-core punk singer, evangelist and performance artist who loves his G*d. He might happen to do it in fishnets and a women’s dress, combat boots and screaming… but he truly loves G*d. But as he asked his question we woke from our musical spell and one by one raised our hand, including him.

Paisley said that we’ve all been hurt by Christians… but that had nothing to do with Christ. That man is amazing at spreading the word of Christ in a beautiful, subversive, punk, dress-clad way.

David Wraith said something similar when I interviewed him for my podcast. He is a kinky black Christian who talked about the difference of what people have done in the name of Christ as compared to the core message of Christ. It was beautiful to hear it out loud again.

And yet, the image still strikes me. Hersey’s Chocolate Crosses by the gross-ton produced for a consumerist experience of the holiday season.  But who am I to judge. If we go from the Christian standpoint, only G*d can do that.

I won’t be buying one. Instead I’ll shove a few marshmallow baby chickens in my mouth. I’ll deal with my conflict around consuming mass-produced sugar subsidized by the government shaped into the suffering animals caught in cages by corporations who have reduced life to a conveyor belt of pollution and oppression for another day. Nom nom Peeps nom.