A Story of a Collar

Over the years I have had many collars. The metal-covered leather collar my Master in England had me wear when I was in his presence back in the late 90s. The gold-plated eternity collar I wear currently when I do formal ritual work for the Goddess I serve. The tattooed collar I have embedded in my skin for her (two bear paws of her paws always on me). A chain collar with a lock that I had to have cut off of me eventually. The cheap green nylon dog collar I wore as Lady the husky, my nose painted black, streaks down my face.

Back in 2006 I had Bear, my spiritual/sacred owner in her fur-covered grandeur, inform me that I could no longer wear collars for those who did not understand that they could never be “only theirs.” That I was owned by hers. That they would need to understand. Even now I tend to go into an altered state of consciousness whenever I don a collar. There have been those who did not get it, or combined it with play using “mine” that even triggered violent reactions. It has thus become the rule that it is only for those who understand. 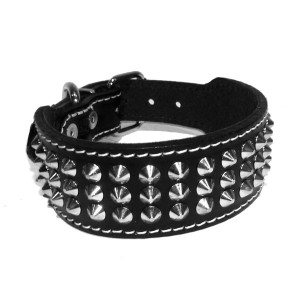 Hunter understood. When we were at Eagle Leather in Melbourne, Australia, we found a heavy leather collar covered in studs. It was so heavy. It grounded me into the here and now. Into being my animal self.

Lady, my fluffy husky dog self, was a bit on the dumb side. I don’t mean that in a self-deprecating way, but in an honest way. Lady, both as a pony and as a dog, drooled. She was faithful, loving, but did not always understand anything but clear orders. She took orders literally. She pee’d inside sometimes, when I as a human knew it could be okay. She could be messy, but cleaned herself up afterwards. She was my chance to let go.

Her green nylon collar had a matching leash, both of which were found at a cheap discount store. I still own them, with a pill case attached to it that has the old number and name of the person who last handled her. In 2002, at Burningman, Furry and I even had her licensed. She is a good dog.

But as I started my gender transition more formally, I started running into more and more challenges around how I was being seen by the world at large. Binding my chest down, I just couldn’t quite handle “good girl” any more, even as a gender-queer creature. Not by people who did not see me as a boy in my life-at-large. Boy was more of my space at that time, not quite man. Not the man I experience myself to be now.

Hunter and I found the collar, and the locking in of Gunner began.

Gunner was/is a guard dog. Rottweiler, perhaps with a bit of Doberman in the mix. An iconic example of Gunner was a night at a puppy mosh in Melbourne that took place after I had taught an animal play class for Chains in 2006. Someone had brought a human pony to the event, and the human dogs started picking on the pony. They cornered her, and were barking. Gunner got between the dogs and the pony, barking, giving her space until her handler/owner was able to get into the space and get her out of there. Later that night I was going around sniffing the crotches of leathermen and masters at the party. That is one of the bonuses of being a human dog. Crotches are nose-height, and a permission is more likely to be granted.

I was wearing the heavy collar that night.

Since Hunter and I ended our relationship at the end of 2009/early 2010, I have not worn the collar. I sat in my “portable perv kit”, a fishing tackle box I have covered in stickers over the years that I used for a long time to carry and sort my toys beyond my rope and cane obsessions. I knew it would eventually get used on or given to someone… but I did not know who. I too it to animal play classes to show diversity – the collars of Lady and Gunner side by side. Two human dog selves side by side, shared by one person.

At Paradise Unbound this year, I figured out who it belonged to. My sweetie and I were talking about folks who had attended my human animal class, both human and human-animal. One triad kept coming into our consciousness, and when the collar came into discussion, the idea was pretty clear.

We gifted the collar forward together. Because it fit. Because they had trained a hard-line dog who had a heart of gold. Because they were someone who would use the collar in a place of firm love. Because I respected them, and they needed a collar that was theirs. That the collar belonged to them next.

In the Leather community we talk about earned leathers and gifted leathers. To pass on memory and tribal connections. That my leather jacket was given to me at age 16 by someone who saw me cold, and when I tried to give it back, said no, no it was mine. They saw my future ahead, and Rune has watched me grow into my kinky truths since then. My suspenders were gifted to me after Glenn passed away, carrying the monkey boy’s memory with me with every step. But some were earned through pain and sorrow, my gloves lost by SouthWest airlines have transformed all gloves into a memory of the lessons that my honor and reflection on tribe is with me whether someone is watching or not. That my key fob reminds me of the keys I open for others. My back patch. My cover and boy’s cap.

Gifting is part of our culture. I see you.

I see you. And I see my memory. I am on all fours, face in the fur. I am powerful and strong. I am turned on by the heavy studs. I am pulled into the bed. I am held and safe. I am guarding you, because this is how I have been groomed. I am loved, and know how to do this. I have a place.

I see you, and pass this forward.