A reply to a recent conversation… on racism

I response to the post, there were a variety of thoughts shared on this very complex matter. Thank you to those who gave thoughtful responses, and shared additional information and resources. Issues around racism, as well as the specific issues in this case, are far from cut and dry. I had however promised that I would get back to this issue in this string of replies, and thus felt it was important to do so.

Because my reply is 3 pages long, I have decided to post it as a blog entry.

Let me be transparent that each of these threads that stemmed from my initial entry/post could each be talked about for hours. Hell, lifetimes have been spent on many of them. This is just dipping my toe into the issue to share some of my current thoughts.

On the case of racism and reverse racism, if we use the definitions provided by Aidyn at this link:
http://www.dailykos.com/story/2010/07/15/884649/-Why-there-s-no-such-thing-as-Reverse-Racism#
much of what is declared by the world at large to be reverse racism, as brought up by Mick, is actually racially based discrimination. Cases like the Jose/Joe story lead to an example of the discussion:
http://www.huffingtonpost.com/2014/09/02/jose-joe-job-discrimination_n_5753880.html
Is it possible that a whole stack of people are individually racially discriminatory against Hispanic applicants. Sure. But is more likely that a culturally pervasive myth plays into racist decision making. It also sets us up for Dennis’ definition of racism. 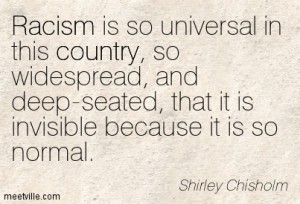 I’m betting that the bulk of those folks have *no idea* that they are making those sorts of decisions. It thus, under the definitions stated in the first link, becomes racism. Because it is embedded in the story of a race, a story we have internalized.

People become racists through active participation in some cases, but more often, racist behaviors and actions are perpetuated unconsciously. Children mirroring parents mirroring grandparents. It is a form of cross-generational embedding. Unfortunately, as Scarlet brought up, this form of cross-generational embedding also comes up in the form of trauma passed on. This is also known as historical trauma:
http://www.sharingculture.info/historical-trauma-impact.html
Though the above link looks predominantly at native/first nations’ concerns, it applies to the African American population as well. Thus, how African American populations respond to encountering the police is not only based on how police are behaving in a given moment, but how they have interacted with police over a lifetime, and generations before.

The black-to-police challenges at play in this discussion are multi-layered. There are specific cases, but there is also racism, and racial discrimination, and racial profiling, and historical trauma, and media coverage taking things to their own directions, and a *LOT* more. Add in classism and red-lining (decisions based on zip code, ie financial likelihood of success, often for loans and financial access), and we get a big cocktail of pain at play that layers on. But the effects of living in a world where unconscious racism at play is enough to have young black men being far more likely than young white men to be shot by the police:
http://www.motherjones.com/politics/2014/08/police-shootings-michael-brown-ferguson-black-men

It is through experience cross-generationally with police and a wide diversity of authority figures that paints what looks like reverse racism in my opinion. White people (the historical bulk of authority figures in America), especially white men, get perceived as being certain stereotypes before they every open their mouths or take any actions. However, there is a difference about race-based discrimination and culturally-embedded racism.  To “discriminate” has different definitions in Oxford English Dictionary:

The first definition is important. We as humans need to discriminate the difference between rotten food and healthy food. Between a warm day and a cold day. This keeps us safe. And… in many communities, discriminating that a car is “normal car” vs. “cop car” is a form of discriminating that has informed their notion of safety. If a normal car drives by, you can hang out and just be yourself. If a cop car drives by, pull your hands out of your pockets, act as what they perceive as “normal,” don’t do anything “suspicious.” Though this does not apply to the cases recently in the news, I think it is important to consider in culturally embedded racist behaviors.

These systems of culturally embedded racist behaviors have literally been a form of survival mechanism. Which sucks to be true, but it is.

These things are not forgiveness of the racist behaviors, nor is it an excuse to allow to have it continue. It takes people, one after another, changing their actions and behavior. It takes stepping in when wrong is taking place. We need to shift, across the board. We start with awareness of our own behaviors and what we see around us. Racism, looking at the quote above, needs to not be so “normal” in the future.

I appreciated though that Amy brought up the police tactics of why people are shot multiple times:
http://chrishernandezauthor.com/2014/08/24/a-dose-of-reality-for-ferguson-missouri/
It is important to know that this is a standard operating procedure for many reasons as well-listed in the article she listed.  Though I myself disagree with many cases of violent response, especially the fact that is disproportionately used against black men, it is good to know why the police respond thusly.

Now as for affirmative action and institutionalized systems of Caucasian individuals being discriminated against, it sucks. But let’s look at our college-trained workforces compared to the population at large. Yes, we have a president with African heritage, but if we look at the senate and congress, the percentage certainly doesn’t match the percentage of the population at large. Lawyers, doctors, accountants, English professors, computer programmers… it is disproportionate. We are still feeling the effects of slavery, Jim Crow, et al. Historical trauma.
http://www.washingtonpost.com/blogs/answer-sheet/wp/2014/07/03/why-we-still-need-affirmative-action-for-african-americans-in-college-admissions/ (very interesting read btw) 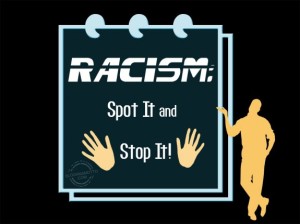 It gets argued that that means those folks are lazy, need to pull themselves up by their bootstraps. Er, you’re not getting it. If you are already in a place where your Maslow’s Hierarchy of Needs has you working from a place of seeking love and belonging, you have far fewer steps to climb that someone seeking food and shelter, let alone safety.
http://en.wikipedia.org/wiki/Maslow%27s_hierarchy_of_needs
Could we *also* use this for *all* students with financial lack, absolutely. Hell, look around those same places for the percentage of folks who grew up with food-stamps as part of their daily life shall we?  Folks dealing with racism get an extra scoop of crap on top of the rest of it. Maybe two scoops. Color-blindness isn’t an argument that is viable, see the Jose/Joe argument above. Is there an issue with affirmative action that the slots are being filled by African American families with inherited affluence/privilege as Cashin argues in that above post. Perhaps. But let’s look bigger picture… which likely includes adding on tools for access, not taking them away from folks who need those extra hands up.

Now, as for Xadrian’s point about brandishing vs. carrying with Ohio gun laws. Good reminder. Plus, Having someone point a gun at someone else, fake or otherwise, is not okay, as Angela brings up with her BB gun story. However, it will be interesting to see how this specific case unfolds as the credibility of the person who originally called 911 is being actively questioned:
http://www.daytondailynews.com/news/news/crime-law/shooting-victims-father-you-could-hear-he-was-gasp/nhL55/

With the grand jury convening on Monday, it will be interesting to see how the case turns out.