Sex, Gender, and Orientation – A Transcript

About a month ago I had the opportunity to do a week of hosting on Whips, Chains, & Duct Tape – a kink-themed Facebook Group, on the topics of kink and gender.  For the introductory video, I broke down the differences between sex, gender, and orientation. Following is the transcript from the video – enjoy!

Hello, beautiful beings. My name is Lee Harrington and I am so excited to be her this week on Whips, Chains & Duct Tape.

Now, what does that word transgender mean? For a lot of different people, it means a lot of different things. For some people, and this is the way I’m going to be using the terms, it’s an umbrella term, right? It’s like saying kink is this huge umbrella term involving everything from SM, or intense sensation play, to bondage and restraint to power exchange and dominance and submission, to people who enjoy fetishes of different sorts, cross-dressing, and people who enjoy… in some peoples’ definition of kink, swinging.

It’s a huge category of stuff that means “things beyond what is considered the day-to-day expression of sexuality.” Which we could go an entire dialog around how that is really a misnomer.

But that’s OK. We’re going to skip that for right now, maybe come back to it later.

But transgender becomes this big umbrella term of cis-gender. Now, in Latin “cis” means “same,” that’s all it means. Cis means same. And so when people use the term cisgender, what they are saying is that the gender they were assigned at birth matches up with the gender they experience themselves to be. 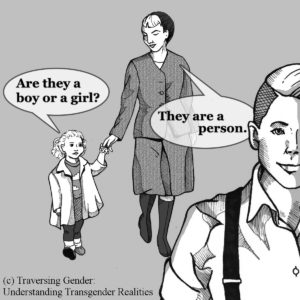 Therefore, transgender, “trans” being “across,” is anything that goes across from what that base experience that someone who was assigned a gender was to what they are now.

For some people, like myself, that’s a binary experience for the most part. I was assigned female at birth, and now I am a man.

Just like you don’t say, “Are you a brunette?” I mean you can use it, but it’s really awkward on the tongue.

There are some people who do use it, others who don’t.

Now, transgender is a huge category of stuff under that umbrella. You’ll also run into people who use it as a very specific, finite term to mean somebody who is moving across a binary experience.

There are lots of other experiences under this umbrella as well. So, what I mean by that is that not only are people going from male to female or female to male, as if there are only two options.

There are people who are genderqueer who are moving back and forth.

There are people who are bigender and experience themselves as two different genders based on where they are on a day-to-day basis.

There are people who are androgynous, and none of this… and just obliterates into that neutrality. I think of Tilda Swinton or David Bowie. Right? The notion of androgyny,

That there are all these different experiences of gender beyond a binary assumption that there are men and women. Boys and girls.

Because the world is more complex than that.

People confuse “sex,” what you are assigned at birth, and “gender.” Now, sex is this thing where people pick up the baby and go, “Oh, it’s a boy,” or “Oh, it’s a girl,” but the reality is there are so many other expressions out there of sex, even at that moment of assignment.

Whether people are referred to as intersex, or having disorders of sexual difference, or some other term out there, there are options and realities in just sex beyond that.

Do you actually know that?

But XY/XO is the chromosomal sex. There is the gender you were assigned at birth. Then there is gender identity. Legal gender. Legal gender is what my legal identification says, it’s what the government says my gender is.

We make these assumptions based on what we see another person expressing their gender. The ways people portray their gender.

Now, all of these things get really confused, especially, I see, in the kink community, but in any sexuality population, or in any place people are talking about sex with any orientation.

Gender is about me.

Orientation is about who I’m attracted to.

Who knows? Maybe I’m attracted to you, I don’t know. I haven’t met you yet. It’s possible.

It’s all about what I’m into.

Now, and how they portray that gender.

Some people may orient towards a specific body type. “I am into big chicks.” or “I’m into flowing people with large amounts of mass that can curl up against me and wrap me in their arms.”

That’s what they are attracted to beyond a gender.

For some people, their orientation is towards a power exchange dynamic.

I know people for whom their sexual interests might be two women together, actually, I know this couple down in Texas that this woman is a lesbian—identifies as a woman who is romantically and sexually interested in women, but their primary orientation is towards power exchange dynamics, and that their master, in a consensual master and slave dynamic that they happen to use in their power exchange dynamic.

Their primary need is to have that power, and their master happens to be a man. 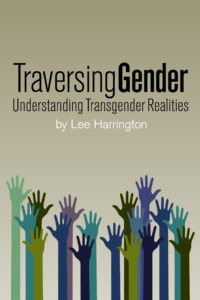 This can all get really confusing for some folks I find, who weren’t aware of these issues, who go, “Well, if you were assigned male at birth, why would you transition to be a woman, if you’re sexually interested in women?”

So, that’s my hope for today. That we’re going to use this as a language we’re going to talk about through the week. We’ll talk about how these things interact with each other, and if you want to learn more about those different types of ways that there are sex and the different types of genders, I talk about them in first two chapters of my book, “Traversing Gender: Understanding Transgender Realities,” which looks like it’s in a mirror reflection there, but it is what it is. It’s “Traversing Gender: Understanding Transgender Realities,” and as we go further through the week, I’m going to talk about other book resources and other online resources for people who are interested in this as well.

If you have any questions about the differences, crossovers, and where these places interact on gender, orientation, and sex, we’re going to talk about that here in this thread, and we’ve got a lot more coming up this week.

I thank you all for joining me, and for being a part of Whips, Chains & Duct Tape, and take care.