For those of you who are long-time readers of this blog, you will know that I have rarely in the past done a full blog entry by a guest. I have interviewed allies, written about them, and once posted an email Deborah Anapol sent me about her concept of safer sex. However. when I read this blog entry by Graydancer (who you know I have had on my podcast a few different times), I just was nodding the whole time. Though I considered writing a rebuttal, I felt it was important to share the whole thing. In his graciousness, Graydancer has approved to have it appear here. Thank you Gray.

Recently in a class I was asked the usual question: how long should I do rope before I try suspension?

Before I tell you how I answered it, I’d like you to ask yourself one question: in your mind, who did you picture asking the question – a top or a bottom? Whatever you answer isn’t necessarily relevant to the risk management stuff that follows, but it’s an interesting insight into your view of who invests in and needs rope bondage education.

I gave Sex Education Standard Answer No. 2, “It depends” (No. 1 is, of course, “communication”). I pointed out that you could learn a single column tie and a taut-line hitch and where to put them on your partner in about 45 minutes and do a suspension; however, you could spend years of training and not be able to do some of the wild-n-crazy stuff that people like m0co and Beemo do. All suspensions are not created equal.

After the class I was approached by a colleague – and that’s being egotistical, as she’s actually a much more skilled rope enthusiast than I was. She disagreed with my assessment of time. “Yes, you could learn the basics of a suspension,” she pointed out, “but you wouldn’t have the experience to deal with everything that could go wrong!”

I went for the easy target of hyperbole: “Anyone who thinks they have the experience to deal with everything that could go wrong is a walking manifestation of the Dunning-Kruger effect,” I said. She looked annoyed (and rightfully so; that was a cheap shot on my part) and modified her statement to “…the great number of things that could go wrong.”

Which is a very valid point. My statement about the 45-minute suspension is based on an experience I had in the Marine Corps. It looked something like this; I’d especially like you to watch from the :34 – 1:26 mark:

First, notice the number of people that are about to be suspended. Remember, also, that these are not Marines; these are Marine recruits, and while I love the Corps, I can tell you from personal experience these are not examples of the most skilled learners. All of these people are being taught how to tie a very basic swiss seat (see left) and then taught how to attach the line to a carabiner and rappel down the side of a building. 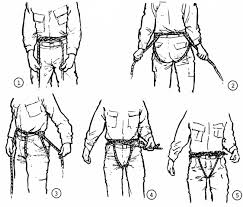 How many of these recruits fall to their death? I did a search, and couldn’t find statistics that were reliable. However, there is a relatively high injury rate in general for recruits (17%) and of those the vast majority were related to running (shin splints, etc). What I can tell you is that no one was injured during my experience, and a quick web search for “Marine recruit injured rappel” pulled up no significant results in the first few pages (except this one, but that’s the Army, so totally irrelevant). How is this possible? Considering that we talk about people taking “years” before they should even look at a carabiner, how does the most elite fighting force ever known* manage to keep recruits from plummeting to their death?

Recruits learn how to make their safety harnesses, or seat, using six feet of rope. They wrap the rope around their legs and hips, securing it with a series of square knots. “Safety is very important during this phase of training,” said Sgt. Mauricio Ramirez, drill instructor, Instructional Training Company. “We check the recruits’ safety harnesses three times before they rappel.”

Get that? Not twice. Not four times. Three times. Because as they line up for the tower, there are checkpoints where the instructors make sure the DARs (DumbAss Recruits) have actually tied it correctly. And tight enough. And while I don’t know what they were exactly, I’m betting that the Drill Instructors had a very specific list of points to check on each recruit. It’s similar to the way the DI was teaching how to rappel, breaking things down into easily-repeatable mnemonics. I do the same thing in my “Tie Em Up & Fuck Em” class: Secure the hands. Wrap the body. Control the hips.

By creating a system, they control the variables. The recruits have a standard length of rope, a standard carabiner, a standard way of tying the rope. That’s how you can learn suspension in 45 minutes: a single column tie, a taut-line hitch, a face-up suspension done low enough to remove a great deal of the risk of falling (certainly to below the risk of tripping on the mat, say).

Incidentally, you know what the official term is for a suspension that holds someone 4″ off the floor?

It’s called a “suspension.” Also, I know of no cases of wrist drop/strangulation/leprosy/meninitis or any other significant injury from a single-column tie around the hips or around the chest. Ligature marks, maybe. Shortness of breath, hardness of cock, wetness of cunt, sure, those are common, but easily dealt with using a variety of remedies. This is why I stand by my assessment of 45 minutes (or less) is all you need for a basic suspension. The risk factors are mitigated by that one word: basic.

The real risk, to my mind, is boredom. It takes true skill to make a basic suspension exciting, connective, and/or sexy. And that’s for tops, bottoms, or anyone else.

I’d like to suggest that we stop giving arbitrary answers like “in-person training” or “four years” or “have you bought my DVD?” to the question of When can I suspend? Instead, it should be answered much in the same way the phrase sexual contact is: What does that look like to you? If the answer is “I want to be the next Murphy Blue!” then that’s going to be different than “I just want to feel like I’m off the floor.” Let’s talk about actual risk, and quit falling into the lazy trap of pretending that it’s all OMG GOING TO KILL YOU.

All suspension risk is not created equal.

Tell me why I’m wrong! Also, part 2 will deal with suggestions straight from Risk Management science to more safely do the non-basic stuff.

You can feel free to reply to Graydancer here at the original blog entry, or in dialogue here at his twitter feed.

I teach a 6 hour introduction to suspension bondage class for up to 6 riggers at a time. or 10 with a skilled assistant who knows my style of suspension basics. Why? Because my brain can only track that many folks. Why 6 hours? Because I teach chest harnesses, hip harnesses, one-column ties, combining them, and make folks lift a dead weight (and safely lower it in case your partner passes out mid-scene). I do all of that before anyone flies, whether it is self-suspension or partnered. And then we work on head cradles, transitions between poses, and connecting with a partner as we’re doing all of this stuff. If I have folks that did well, I also teach my variations for inversions. And make them all drill them at the end for me, a few hours after they learned it, to make sure they recall it all.

When you say you want to learn suspension, ask yourself why. When you say you want to be suspended, ask yourself why. If you want to do uncomfortable or torture suspensions, that is a different goal than comfortable ties folks can effectively sleep or enjoy sensual play in. And, if you’re saying do it because everyone does – really evaluate yourself. Why? Because if you’re not passionate about it, you can spend your energy better by honing your passions than burning yourself out on something some internal voice is pressuring you into. Some of the best

Thank you Graydancer for sharing your entry with us all. Fingers crossed, I hope to be at his amazing upcoming event he is doing this February called Ropecraft in Austin… if I go, I plan to be offering private lessons there.