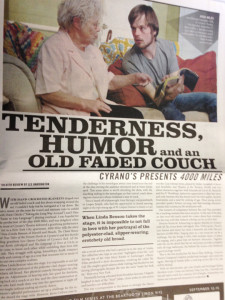 A Theatre Review for Anchorage Press

With hand-crocheted blankets draped over an old faded couch and five doors wrapping around the set, I couldn’t help but be intrigued as I sat down. The entry music set the tone for travel and intimate tales to unfold with Dixie Chicks (Taking the Long Way Around) and I Nine (Same in Any Language) playing overhead. I was hopeful for the production of the play 4000 Miles, and was delighted when the team at Cyrano’s Theatre delivered a gratifying performance.

Set in a New York City apartment, 4000 Miles tells the story of Vera (Linda Benson of Harold and Maude, The Clean House and True Tales of the Frozen North at Cyrano’s) and her bicycle-riding grandson Leo (Jaron Carlson of Cyrano’s Red, All the Great Books (abridged) and The Language of Trees at UAA) as they come to know each more authentically other while unfolding their lives side by side. They struggle with aging, friendships, death, romance, family and coming of age in a way that resonates for so many of us in our own complex realities.

When Linda Benson takes the stage, it is impossible to not fall in love with her portrayal of the polyester-clad slipper-wearing crotchety old broad. Her physical comedy throughout the play is spot on. Adjustments of hearing aids, her quest for dentures, laying back on a couch in Act 5, and the close examination of those who have made their way into her apartment at night all deliver laughs without ending up overly cheesy.

Benson’s splendid performance set up a challenge for the actors she shared the stage with. However, Jaron Carlson rose the challenge in his monologue about a lost friend by the end of the play, leaving the audience entranced and damp eyes in parts of the house. This scene alone is worth attending the show, with the touching ending to the monologue on that central couch showing two characters whose evolution is easy to track.

Vera is based off of playwright Amy Herzog’s real grandmother Leepee Joseph, who had the opportunity to attend opening night at the ripe young age of 95. Leepee (known to many as Lee) was a social activist who had a special tie to the state of Alaska. She called her two trips to our state “highlights of her life,” and during one of her trips Mary Katzke of Anchorage’s Affinity Films produced a short documentary involving her called “The Gift.” She caught a giant salmon while visiting, but decided on not having photographs because the vest she wore “made her look fat.” How very New York.

Personally having relocated from Brooklyn last year, I happily laughed at each of the “local” jokes, clever pokes at rent prices and laundry cart difficulties.

This was a juxtaposition to the desire to strangle the characters Bec (Leo’s former lover, played Taylor Campbell of Sense and Sensibility and Playboy of the Western World) and Leo, whose characters together with Amanda (of UAA’s M. Butterfly and Hot N’ Throbbing), epitomize a generation in their late teens and early twenties that has found itself rife with apathy, familial frustrations and a need for coming of age. These young actors provided quality helmet-carrying and heel-wearing characterizations that summarize the archetypes well.

One moment of compassion between Bec and Vera provided for a touching moment that was a surprise. At the end of the play, on that tired old couch, watch for a piece about how emotions can feel real, with that realness echoing out for us all to feel.

Director Krista M. Schwarting (a regular director at Cyrano’s with All The Great Books (abridged), Miss Witherspoon, Freud’s Last Session and more) has done a beautiful job with this production of 4000 Miles. Staging plays in a one-room set can be a challenge, but she brings it alive with multiple layers of physical staging, and a great tone set between characters. Together with the eye for detail that the set and props provide (complete with off-stage bathroom), the behind-the scenes crew delivered a good package overall.

This is the last production for Sierra Ileta Halberg, Cyrano’s Theatre Company’s resident production manager and sound designer. Moving to Seattle (after a road trip across the US), she will be missed.

With no intermission, get your snacks and beverages before the show starts. Come out and join Vera, Leo, Bec, Amanda and the old faded couch for a journey full of laughs, frustration, evolution and unexpected moments of tenderness.